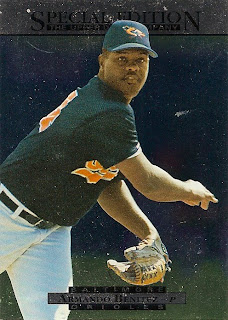 Yesterday I saw that Baseball-Reference was featuring a blog post entitled "October Blown Saves" and I immediately thought of Armando Benitez. I pulled up the entry and whaddaya know, our old match-in-the-gas-tank buddy has blown more saves than anyone else in postseason play. He's saved four games in the playoffs and World Series in his career and blown a whopping six saves. His overall postseason ERA is 3.56, which seems decent until you look at the individual series: 1996 ALCS - 7.71 ERA. 1997 ALCS - 12.00 ERA. Those are his two worst October performances, and whaddaya know, both were instrumental in keeping the Orioles out of the World Series. I still see Tony Fernandez in my nightmares...you know, the freaking prehistoric Indians second baseman whose 11th-inning home run off of Armando clinched a 1-0 win for the Tribe in Game Six of the 1997 ALCS and sent them to the Fall Classic. Ugh.
I suppose Benitez could take solace in the fact that the man right behind him on that blown saves list is Mariano Rivera. Of course, Mo is 39-for-44, a slightly higher percentage. Plus he has those five championship rings. But can Rivera say that he's saved ten games in the independent Atlantic League? Case closed.
Posted by Kevin at 7:07 PM

I was at a Barnstormers/Bears game in July and saw Armando warm up (though he didn't enter the game). He accidentally threw a ball into the outfield from the left-field bullpen. True story.

William - Fantastic. I went to an O's game in 1995 and was sitting next to the bullpen, separated only by a chain link fence. Doug Jones definitely hit the fence at least once.

Ryan - Yeah, it's still hard to believe how much time has passed. I was a sophomore in high school. Now I've been out of college for six years.

AB - when you absolutely positively need that runner on third to score. via walk, balk or just plain hit, he'll get the job done. There was no better scene for the opposition than to see this man come in from the bullpen with runners on base...

Max - I still remember when he balked in the tying run against the Mets and then gave up a walkoff homer. Was it Delgado that hit it?

i'm pretty sure it was delgado. that game was cosmic retribution for years of watching this dude do that to us. of course, any sort of retribution is short lived for mets fans these days.