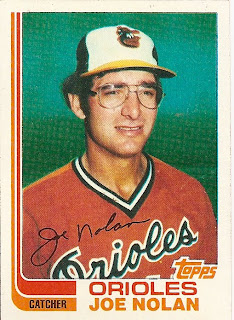 Joe Nolan's looking pretty orange in this photo, but he's got nothing on the throwback threads the Orioles wore last night. It was Turn Back the Clock Night at the Tropicana Dome, which might have been problematic for the Rays, who have only been in existence since 1998. Since there's nothing fun about reminiscing over the salad days of a dozen years ago, the home team appropriated the uniforms of the 1970 Tampa Tarpons, a former minor league affiliate of the Cincinnati Reds. While it was jarring seeing James Shields, B. J. Upton, and Evan Longoria in red and white caps and v-neck pullovers, they had nothing on the O's and their 1971-vintage threads. In an act of sheer genius, the Birds wore the rare all-orange jersey and pants combo that Brooks Robinson's Sporting Goods Company foisted upon his teammates for two whole games that year before they were banished to history. They were a true thing of beauty, particularly for those players like Felix Pie and Koji Uehara who wore era-appropriate black stirrups with white sanitary socks underneath. Manager Buck Showalter was not a fan, as he kept his black pullover on for the entire game and insisted that he'd never be seen in the pumpkin gear again...killjoy. Of course, the Orioles looked even better in their painfully loud duds because they won a solid game over the Rays, 6-0. Jeremy Guthrie kept on rolling, Luke Scott hit yet another homer, and Uehara and Mike Gonzalez slammed the door on Tampa Bay. Come back soon, orange uni's! Well...maybe not too soon.

Thanks for filling me in. I saw those last night and thought that "throwback day" had run amok, as I don't remember the dual orange jerseys and pants.

But 2 games in 1971 explains it. I was watching Sesame Street then.

a very well said flash back..

I actually wish they'd wear those for every Friday game because I loathe the Black Jerseys and the "O's" logo on the hat.

night owl - So you've been with Sesame Street since the beginning, huh?

Ryan - I'm not a fan of the O's cap, either. I'm more ambivalent about the jerseys.

I too would like to see the O's caps banished. They should go back to the smiling bird caps permanently.