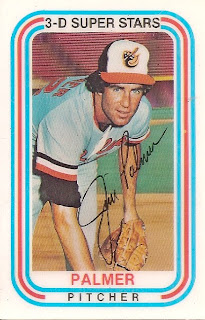 If you've been an Orioles fan since the glory days (and even if you haven't), you might be shocked to hear that today marks the 41st anniversary of Jim Palmer's no-hitter against the Oakland Athletics. It wasn't Friday the 13th, but rather Wednesday, August 13, 1969. I guess "Cakes" wasn't triskaidekaphobic!
It was a night game at Memorial Stadium, and only 16,826 Baltimore fans were on hand to cheer on the steamrolling O's, who at 80-35 stood 14.5 games ahead of the second-place Tigers and had the best record in all of baseball by 7.5 games over the Cubs. The A's were no slouches; at 66-47, they were just a game off the pace of the A.L. West-leading Twins. Oakland manager Hank Bauer, having been fired by the Birds the previous season despite piloting their first World Champion club in 1966, might have had payback on his mind. But it was not to be on this night.
Palmer was making just his second start after a month-plus stay on the disabled list, but it was the opposing batters who looked rusty. He pitched around walks in each of the first two innings, racking up four strikeouts in the process. Meanwhile, Don Buford led off the Oriole first with a triple and scored on a Paul Blair flyout to stake the pitcher to an early lead.
After failing to score on a bases-loaded threat in the second, the Birds broke out in the fourth. Oakland starter Chuck Dobson walked Elrod Hendricks and Merv Rettenmund to start things off, and Bobby Floyd bunted them into scoring position for...Jim Palmer? Palmer, hitting .118 entering the game, had singled in his first at-bat. This time he doubled to center field, scoring Hendricks. Don Buford followed with a single to left that scored Rettenmund, but left fielder Tommie Reynolds cut down Palmer at the plate. 3-0, Orioles.
Oakland got their first runner to second base in the sixth inning thanks to an error by Floyd (playing shortstop in place of the defensively gifted Mark Belanger) and a walk to Reggie Jackson. But Jim coaxed flyball outs from the next two hitters to frustrate the visitors once again.
The O's exploded for five runs in the home half of the seventh, and Palmer was once again at the heart of the rally. He led off with a walk against Vida Blue, who had retired the first six batters he'd faced in relief. A passed ball and a Buford single scored Palmer, and a stolen base and a Frank Robinson single plated Buford. Boog Powell followed with a single to chase Blue, and Brooks Robinson greeted reliever George Lazerique rudely with a three-run homer. 8-0, Orioles.
Palmer cruised through the eighth, but battled in the final inning. Whether it was nerves, an insistence not to give in and surrender that first hit, or something else, he wound up walking the bases loaded. The first of these walks was given to Reggie Jackson, the third time he'd gotten a free pass that evening. I'd suspect that some of that was by design, at least. Sal Bando lined out to Blair in center field and Jackson was forced at second on a Danny Cater grounder, leaving Palmer one out away from a little piece of history. He got two quick strikes on Dick Green before losing him with four straight balls. Reynolds followed with another walk, Palmer's sixth of the evening. Ex-Oriole Larry Haney stepped to the plate and there was nowhere to put him. Fortunately, he grounded the ball to Floyd at short, and he flipped to Buford at second for that pesky 27th out! Palmer improved to 11-2 with the win, his ERA a scant 1.77. He struck out eight batters, tying a career high.
There have undoubtedly been scores of great days in the life of Jim Palmer, but this one has to have been near the top.
Posted by Kevin at 9:10 PM

And where was I when my favorite pitcher was turning in this gem? At Parc Jarry watching the Expos and Reds. My parents loved our Montreal trips. 4 kids and two adults in our '66 Impala. Good times.

Palmer was a monster on the basepaths that game! It sure didn't effect his pitching, however.

What I am amazed at is how Rettenmund couldn't score from second on a double by the pitcher!

Tim - Maybe Merv tripped over a pebble in the basepath.