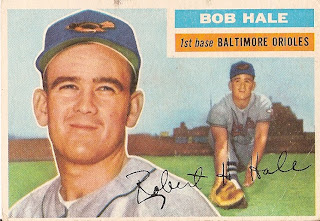 Okay, I'd better tell you about my National experience while it's still somewhat fresh in my mind. Much as my good friend (and lifetime Oriole fan and avid collector and sometime dealer) Ed Schott predicted, one day (one half-day, really) was not enough for me to get my fill. Still, I accomplished a lot yesterday in three and one-half hours on the convention floor. The card you see above was actually given to me by Ed as something of a birthday gift. I'm that much closer to Upon entering the hall, I set out to find the Topps booth. They were hosting a meet and greet and Q and A with Topps employees and collectors on Thursday night from 5-7, and tickets were free but were also first-come-first-served. Most of the heavy hitters were at the back of the hall, as I quickly spotted hanging signs for Upper Deck, Tristar, Press Pass, and others. But I wandered for several minutes without locating Topps. As I was headed back to the front of the hall, I spotted a guy in a Topps polo shirt and asked him where in blazes his booth was. He was of course headed there, so I tagged along with him and nabbed a ticket for the event. There was a line of people waiting for a pack redemption...something about that Strasburg guy. 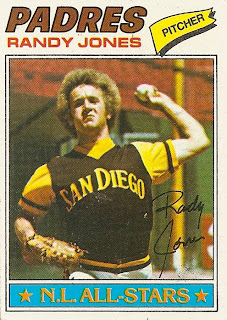 My first task being accomplished, I stopped by Bill Henderson's booth. Bill has a well-earned reputation as the "King of Commons", and I easily could have spent all of my time rooting through his dime boxes. He's "semi-retiring" to Florida with his wife, and is wiping out much of his inventory. I fixated on two large boxes of 1970s Topps: ten cents per card, discounts for increments of 50 ($4), 100 ($8), 200 ($15), 400 (don't remember the price). I spent at least ninety minutes going through just a few rows of the first box, plucking out set needs for 1975 Topps and otherwise grabbing players and photos that appealed to me. I wound up with a ton of 1978 Topps, which is my second-favorite set from the decade. I stopped at the 200 mark, and that was just because my muscles were stiffening up from standing in place for so long. Besides, I wanted to see what else I could find. But before I left, I dug through Bill's 30 cent bin and came away with 35 more cards, mostly 1969 Topps. My favorite find was Aurelio Rodriguez's rookie card, which had a significant error - the photo was of bat boy Lenny Garcia! 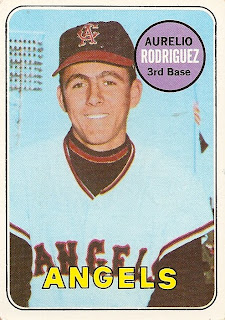 I shuffled around aimlessly for a while and realized I was dying of thirst, so I bought a bottle of Gatorade from the concession stand...for four dollars. It was probably the worst value of the day for me, but I was at their mercy! Besides, there was a table near the concessionaire that had affordable 1950s cards in binders for easy browsing. I spent $30 and came away with seven classic cards, including my first three vintage Browns: Snuffy Stirnweiss, Roy Sievers, and Clint Courtney. Just keeping in touch with the Orioles' Midwestern roots. I picked up a 1949 Bowman of Harry "the Hat" Walker, which is now the oldest card I own. I also went with Matt Batts and Sibby Sisti...yes, I chose some of these cards largely based on the player names. The final card from this dealer was a 1951 Bowman featuring an odd caricature of White Sox (and future Orioles) manager Paul Richards. None of the other cards on display from that set had such a cartoonish appearance. Weird and wonderful. 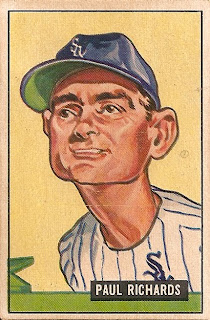 Ed met back up with me at that table, and gave me a hard time about being a newbie and neglecting to bring a bag to store my purchases (I was holding two overstuffed sandwich baggies full of my cheapie 1970s cards at the time). He gave me a spare shopping bag and introduced me to another dealer he knew. This guy had bins full of oddballs: Hostess card panels, pocket schedules, bumper stickers, bottle caps, photographs, you name it. I zeroed in on the Surf card gallery paperbacks, which had been giveaways in 1987 and 1988. They produced individual books for each team, featuring year-by-year color photos of each and every Topps card for that club and brief summaries of the team's performance. You can see an example of the 1987 Indians book at David Henderson's entertaining blog. So I bought the Orioles' 1988 book for $5, and found a few others that should make their way through the mail to other card bloggers, wink wink. Ed was busying himself with a box of dollar-per-card 1970 O-Pee-Chees, trying to complete his Orioles team set. I decided to help him search, and we found some Seattle Pilots for my collection, eight in all. 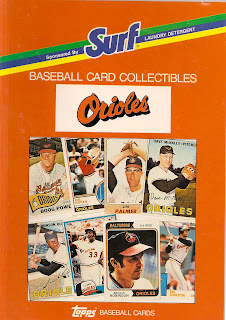 It was getting closer to five P.M., and I wanted to squeeze in another purchase before the Topps event. I spotted a table with 1950s vintage cards marked down...down from "book price", anyway. Most ranged from $5-$30, but I was on a mission for a specific player. Finally I found him in the 1951 Bowmans...former Dodgers pitcher Rex Barney, who became a Baltimore institution as the Orioles' PA announcer from 1974 until his death in 1997. He spent six years (1943, 1946-1950) with Brooklyn, winning 15 games and tossing a no-hitter in 1948 but otherwise struggling with poor control and injuries. At $6, I was more than happy to add a true gentleman with significant Charm City ties to my collection. 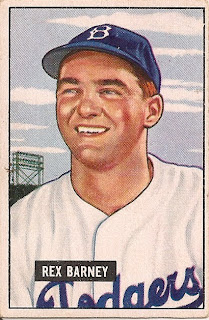 Up in a third-floor meeting room, Topps put on a pretty decent show. They had an open bar with wine and beer, as well as some finger foods. There was a panel of five Topps employees, including their social media guru Mike Mader (who you Twitter-philes may know as the man behind the @toppscards feed; he also blogs on topps.com). The Q-and-A wasn't incredibly captivating to me, but I'll give you some snapshots: they don't think the monopoly created by their exclusive MLB license is a bad thing, particularly since they've been able to redirect some money to things like autograph deals with star players and the Million Card Giveaway. They're NOT bringing back Topps Total because it wasn't selling before and they don't believe it will in the future either. They're trying to pull kids in with Topps Attax and they're happy with it even though it's not selling big. Next year is Topps' "Diamond" Anniversary (60 Years), so they're brainstorming in order to make it a big to-do. Football hasn't been their strong suit historically, but they're working to change that. It went on like this. The best thing about the session was finally getting the chance to meet some folks I'd only known as Internet entities, like Ryan (whom I mentioned yesterday), as well as Chris Harris (whose Stale Gum is one of the trailblazing card blogs) and Beardy (a fellow Baltimoron, whose facial hair is much more impressive than my own).
Oh yeah, there were also prizes! Each meet-and-greet attendee wrote their name on the back of their ticket and the tickets were placed in a box with winners chosen at random. The prizes included baseballs autographed by that Strasburg guy (though one of the Topps guys joked that it was Stephen "Stroudsburg", a Topps mail room employee), some hobby boxes of Bowman products, and some autographed mini-football helmets. When they got to a pair of boxes of Bowman featuring football draft picks, Ryan and I joked that we would be the winners of the products we were least interested in. As luck would have it, we did each win a prize. Ryan got a mini-helmet signed by Cowboys legend Ed "Too Tall" Jones (probably not much use to an Eagles fan like him). I got quite a pleasant birthday surprise when I won a complete factory set of 2010 Topps. Yes, it includes a card of Stephen Whatshisname.

Whew, that was what happened on day one. By the end, I was fully sold on making my way back for a few hours after work on Friday...especially since I had "only" spent $85, less than half my budget for the National. When I left last night, I drove down to my parents' house for a birthday dinner of crabs and beer and ice cream cake. I may have also talked my family's ears off about baseball cards, although I'm sure that's hard to believe.
Tomorrow, I'll tell you about the second day of my inaugural National experience. I promise it will be shorter!
Posted by Kevin at 11:57 PM

what a great day. That is one strange looking Paul Richards card.

ok you had me all sold on this being a legit piece of journalism, with all the best interests of every card collector in mind, until I saw that Richards card. Now I am sure that this is just an audition piece for "The Onion".

I don't care what you've done before or what you will do in the future -- that is the best day you will have in all of 2010, my friend.

I was actually at the ballgame when they gave away that Surf baseball card book! I remember somebody offering me $5 for it as we left the stadium, I guess it hasn't appreciated in value since then. Love the Rex Barney card.

Yeah uh, so yesterday I went to work and then to my bank, where I closed my dormant checking account that had $0.68 cents in it. Then I waited for a meeting with a mortgage broker to discuss getting pre-approved for a mortgage, and he didn't show up.

Digging through boxes of 1950s Topps? You win, sir. You win.

LOL @ William. Kevin sounds like you had a great time, cool thing to do on your birthday. I made one National back in the day when I was a big collector. It was in Arlington and while it was a great time I'm sure it pales in comparison to the ones they run now. (I did get to meet Joe DiMaggio, though)

Matt - On the back they mention that Richards was just preparing to start his first year as Chicago's manager. Maybe they really didn't have a photo of him?

deal - Haha, it is nice work if you can get it.

FTB - If you adjust for inflation, it may have actually depreciated in value.

William - Ouch, rough day. At least it's over by now!

Bob - Glad you've gotten to check one of these out!