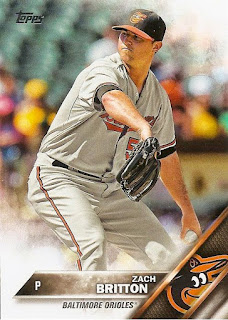 Major League Baseball took an All-Star break, and so did I. Sure, mine lasted twice as long as theirs, but who's counting? The important thing is that Zach Britton ensured the Orioles' home field advantage in the World Series by saving the American League's 4-2 win in last Tuesday's All-Star Game. That's nothing new for the lefty, who has also nailed down each of Baltimore's last six wins. He's a perfect 29-for-29 in save opportunities in 2016 (I'm knocking on wood as I type), and has already racked up 102 saves in less than three seasons as the O's closer. In the next week or two, he should pass Tippy Martinez (105) for third on the team's all-time leaderboard. Then he'll set his sights on Jim Johnson (122), with Gregg Olson (160) still on top for now.

This 2016 Topps card is brand new to my collection, since I decided that I wanted to commemorate my son's birth with a factory set of this year's cards. I haven't sorted them all out yet, but initially I like the fairly no-frills design. The cloudy flourish in opposite corners I could do without. Full-bleed photos look so clean and neat; why mess with that? I'll also note that the first Oriole I pulled out of the box was Henry Urrutia, who appeared in all of ten games for the club in 2015. An odd choice to be featured in the set, but I still have warm fuzzies thanks to his walkoff home run against the Mets last August 19, so I'll just roll with it.
Posted by Kevin at 11:37 PM 3 comments: 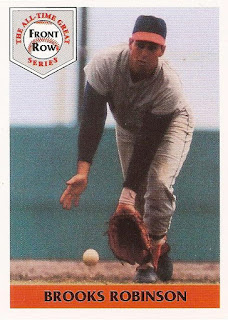 Manny Machado still has his work cut out for him if he wants to match Brooks Robinson's 18 All-Star Game Appearances, but he was just named to his third Midsummer Classic. Not a bad start for a guy who celebrates his 24th birthday today. Next Tuesday, Manny will start at third base for the American League, having won the fan vote for the first time on the strength of his otherworldly defense at both shortstop and the hot corner and his breakout offensive numbers (.324/.380/.590, 29 2B, 19 HR, 53 RBI). He will be joined by four Orioles teammates. Matt Wieters will be a reserve catcher, having rebounded from Tommy John surgery to put up a solid .272/.323/.441 line with nine homers and 37 RBI in 60 games. Mark Trumbo's league-leading 26 home runs, four more than his total for the 2015 season, earned him a reserve outfield slot. Brad Brach, a one-time 42nd round draft pick who has posted a 0.99 ERA, 0.79 WHIP, and 10.4 K/9 IP in 45 appearances as a setup man, will be an All-Star for the first time. And of course Zach Britton, he of the 24 saves in 24 attempts in 2016 (and 0.78 ERA and WHIP, 11.2 K/9 IP, and 5.38 K/BB...) will be one of the anchors of the A.L. bullpen at Petco Park. If you would've told me five years ago that the O's would have five All-Stars, I probably would've assumed that you meant cumulatively in a five-year span. It's a new era.
Posted by Kevin at 6:05 PM No comments: 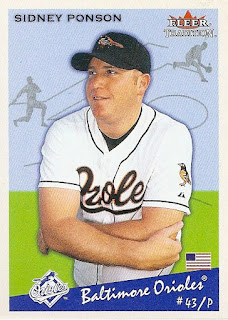 Today I realized with horror that there was a common denominator in each day of the Orioles' current five-game losing streak: I have not posted a blog entry during this skid. I may be a new father, but I can squeeze out a few minutes to set this right. I realize that nine-game West Coast road trips are hellish, but these Orioles are better than this. They are not the gluttonous, underachieving, surly Orioles of Sidney Ponson vintage. They are the 2016 Orioles. The first-place, five-All-Star-having, Buck Showalter Orioles. This is just a bump in the road. Get 'em tonight.
Posted by Kevin at 10:45 PM 1 comment: