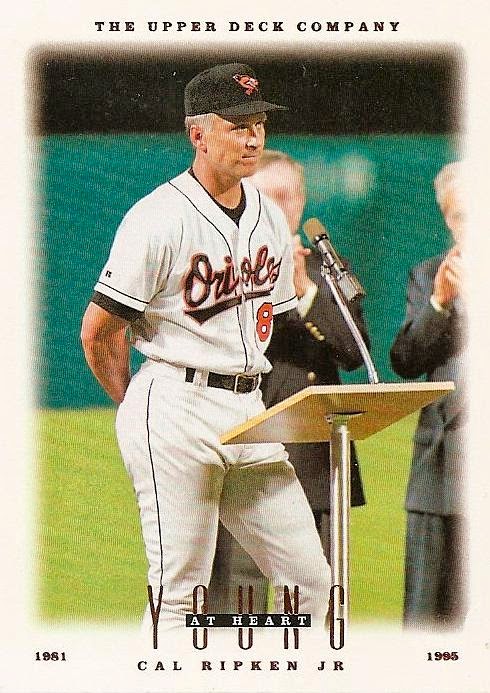 "Young at Heart" was a subset in the 1996 Upper Deck base set that highlighted prominent veterans. If you think about it, it's kind of condescending, though. "Sure, your best days are behind you, but you're only as old as you feel!" The career dates at the bottom of the card (1981 and 1996, in this case) seem like an epitaph. But hey, at least Cal Ripken's card features an awkward photo of him standing at a podium in the middle of the diamond. Harold Baines is also featured in the subset, should you be wondering.
Posted by Kevin at 9:28 PM 2 comments: 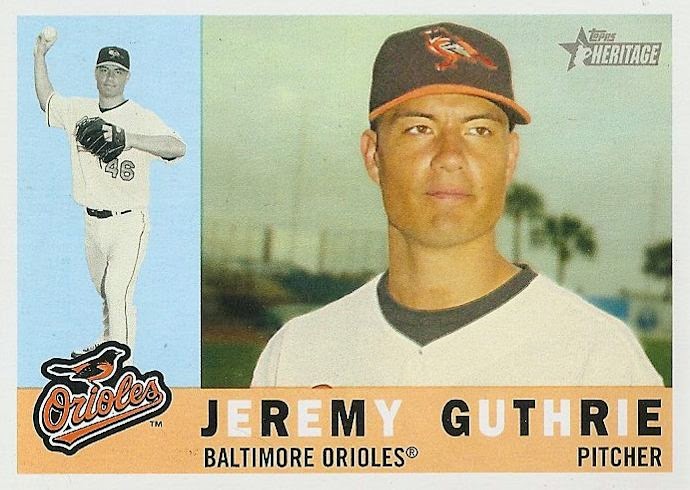 Jeremy Guthrie is starting Game Seven of the World Series tonight. There's a sentence I didn't ever think I'd type. Of course, the ex-Oriole is taking the mound for the Royals in this evening's winner-take-all contest against the Giants. I'm actually rooting for San Francisco; the Orioles' ALCS sweep at the hands of Kansas City still stings, and many of my favorite non-O's (including Pablo Sandoval, Tim Hudson, Tim Lincecum, and the delightfully gooberish Hunter Pence) play for the Giants. Guthrie's post-Game Three press conference in the ALCS, in which he wore a shirt that said, "These O's Ain't Royal", stirred up a lot of anger in Baltimore because it was considered to be kicking his former club while they were down. Once the smoke cleared, I was actually more disappointed to learn that the phrase on the offending shirt was a parody of a line from a Chris Brown song. Brown, for the uninitiated, is a garbage person. So I'm not going to hold some silly lifelong grudge against Jeremy for a pretty dumb clothing choice, but I'm not exactly going to cheer him on, either. When it comes down to it, I'll be pulling for the team in orange and black. Makes sense, doesn't it?
Posted by Kevin at 8:03 PM 2 comments: 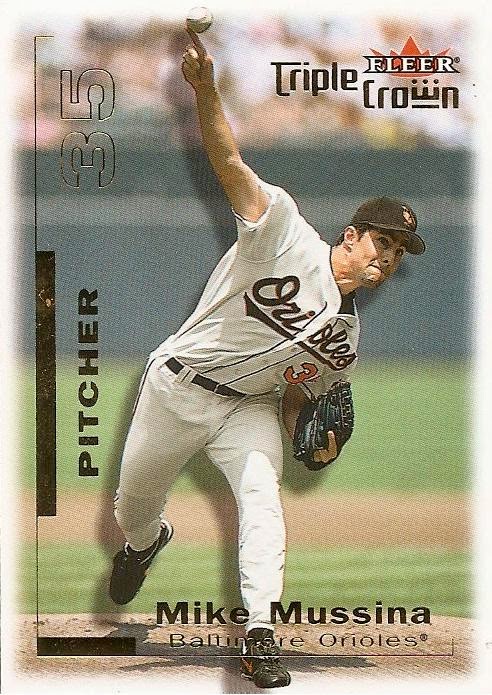 This is a pretty wild photo. Only Mike Mussina's index finger is extended, and it appears as though the baseball is sailing right off of the tip of that finger. It's not a release that I'm used to seeing.
Posted by Kevin at 10:44 PM No comments: 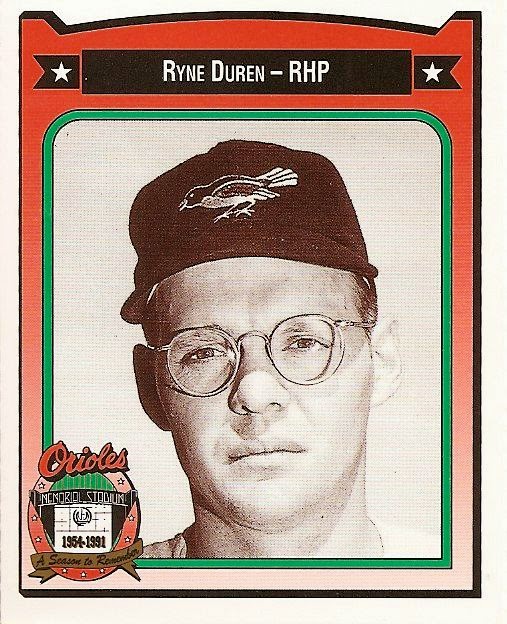 Duren never pitched another game for the Orioles, and eventually resurfaced with the Athletics in 1957. They traded him to the Yankees later that season, and wouldn't you know it, he had a brief burst of stardom. He was an All-Star reliever in New York in 1958 and 1959, accumulating a 9-10 record, a 1.95 ERA, and 34 saves in those two seasons. He struck out 10.8 batters per nine innings, helping to offset the 5.1 batters per nine that he walked. The bespectacled, hard-throwing righty was never that effective again, as he struggled with alcoholism throughout his career. However, he sobered up after he was through in baseball and spent the second half of his life counseling others about the dangers of addiction. He was 81 when he passed away in 2011.
Posted by Kevin at 9:17 PM 2 comments: It's been a relatively quiet weekend on this blog because I'm on the road again. I'm in Richmond, VA (birthplace of Hank Foiles!) to see a Chikara Pro Wrestling show with some friends. Back to normal tomorrow, I suspect.
Posted by Kevin at 10:50 AM No comments: 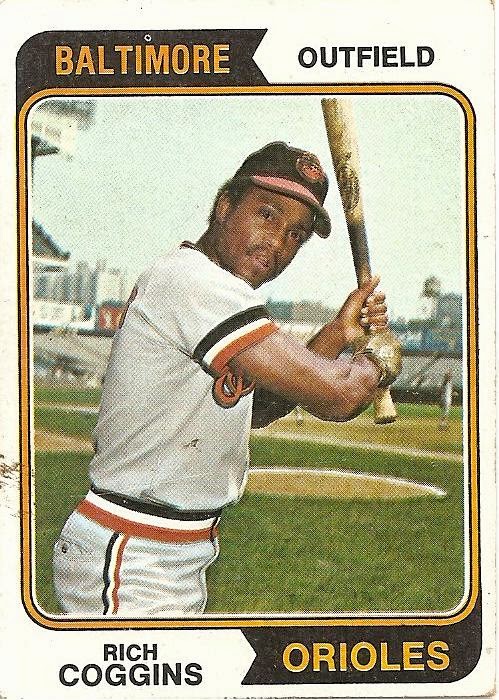 As bad as 1974 seemed for Coggins, things were worse beyond Charm City. His major league career had only two more seasons and 103 games left to it, as he compiled a measly .498 OPS (43 OPS+) for three teams. I've read that a thyroid condition was to blame for his abbreviated and downward-trending career. How frustrating it must have been to be robbed of his livelihood at age 25.
Posted by Kevin at 10:41 PM 1 comment: 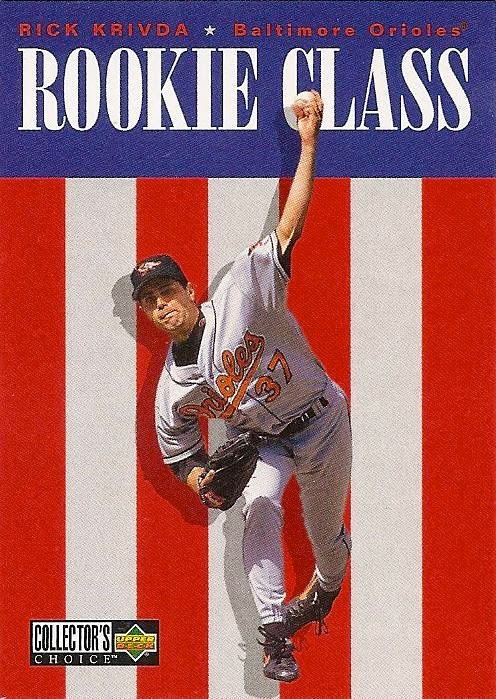 Oh no! Rick Krivda is being forced to pitch in front of a giant American flag for some reason! Only you can save him now.
Posted by Kevin at 6:59 PM No comments: 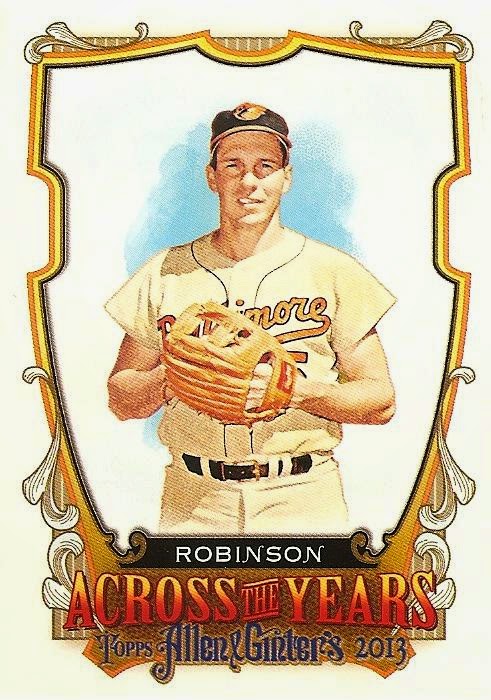 This week I've been featuring cards from a Fairfield repack box that jumped into my hand last weekend at a Target in Charlotte. I've pretty much given up on the repacks that consist of a 50, 100, or 200-card loose assortment, since they're always packed to the gills with junk wax. But the $20 boxes that feature 20 packs of recent-vintage cards still scratch that itch. I can justify buying newish Topps products by telling myself that the money's not going directly to the company (though I'm sure Fairfield is compensating them for their unsold inventory), and a buck a pack is a price I'm willing to pay.

This box consisted of a single pack of 2008 Upper Deck Spectrum, a bunch of 2013 Topps products (Allen & Ginter, Opening Day, Archives, and flagship Series Two), and to my surprise, a few packs of 2014 Topps Heritage. Each box also comes with a randomly-inserted "hit", which in this case was a 2005 Topps Update All-Star Stitches jersey relic of Morgan Ensberg. It doesn't get much more random than that, and the swatch is a lovely deep orange. I also pulled a Craig Gentry autograph from one of the Opening Day packs, which is a nifty thing to get even if I couldn't pick the guy out of a lineup. I filled a few more set needs for Heritage, and got some 2013 Topps Series Two and Opening Day Orioles that I needed. There was also this Brooks Robinson insert from last year's Allen and Ginter, a fortuitous pull from a six-card pack. On the back, it lists some notables that share Brooksie's May 18 birthday, including Pope John Paul II, Frank Capra, Tina Fey, Reggie Jackson, actor Robert Morse, and Superfly Jimmy Snuka. Truly news you can use.
Posted by Kevin at 10:05 PM 3 comments:

Tags: 2013 topps allen and ginter across the years, brooks robinson 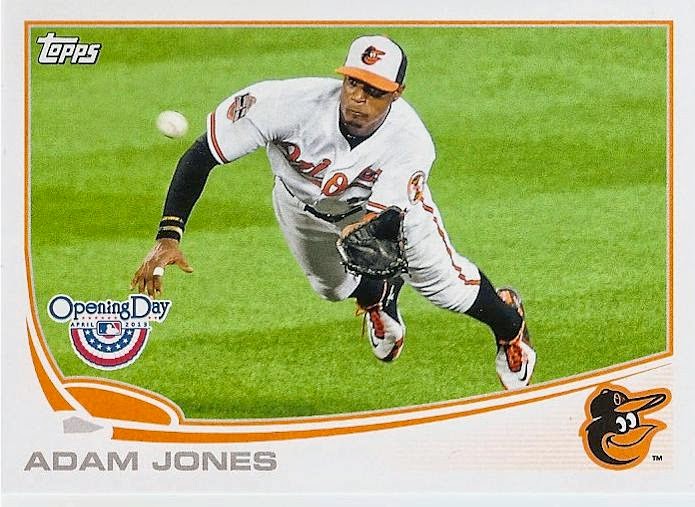 I've been wondering what I could say about the Orioles' 2014 season that I haven't already said over the past six or seven months. It was a thrilling ride, often frustrating, but even more often delightful. I think I captured my feelings succinctly last Wednesday, while watching the O's go down fighting in their ALCS and season finale against Kansas City: I just wasn't ready for it to end. Not yet.

Including the postseason, the Orioles played 169 meaningful games in 2014. They won 99 of them, a level of success they hadn't approached since 1997. That was something of a common phrase throughout the year: "since 1997". It's little wonder, since that was the last time the O's stood atop the American League East after 162 games. Make no mistake, this team belongs to Baltimore's baseball history in a high place, as does that wire-to-wire squad. As the saying goes, "flags fly forever". The Orioles might have been stopped four wins short of the pennant, and eight shy of the big shiny trophy, but they were still division champions. That flag will hang in Camden Yards next year, and the year after, and so on. A four-game stretch of bad breaks and near misses shouldn't cancel out 162 (or 165) successful games.

In my second year as a season-ticket holder, I was fortunate to attend 25 games, including the first three of the club's four postseason home contests. It was my pleasure to witness 17 wins against just eight losses:

If you go further down the rabbit hole with me, you'll see that things started well with a personal four-game win streak, followed by a dip that tracked the team's first-half struggles. Then there was a 10-1 stretch (and an embedded seven-game win streak) that lasted through the season's second half and on into the ALDS, before those magical, mystical Royals gummed things up on October 10. But still, I experienced a lot of great games and moments, including:


That's just from a 15 percent slice of the team's full schedule. I wasn't there for the walkoff homers from Matt Wieters, Chris Davis, and Manny Machado, or Manny's acrobatic defense in his injury-shortened season, or Caleb Joseph's five-game home run streak, or the 60th anniversary ceremonies...it goes on and on. The 2014 Orioles were a joy to watch, and I'm already missing them.
Posted by Kevin at 10:03 PM No comments: