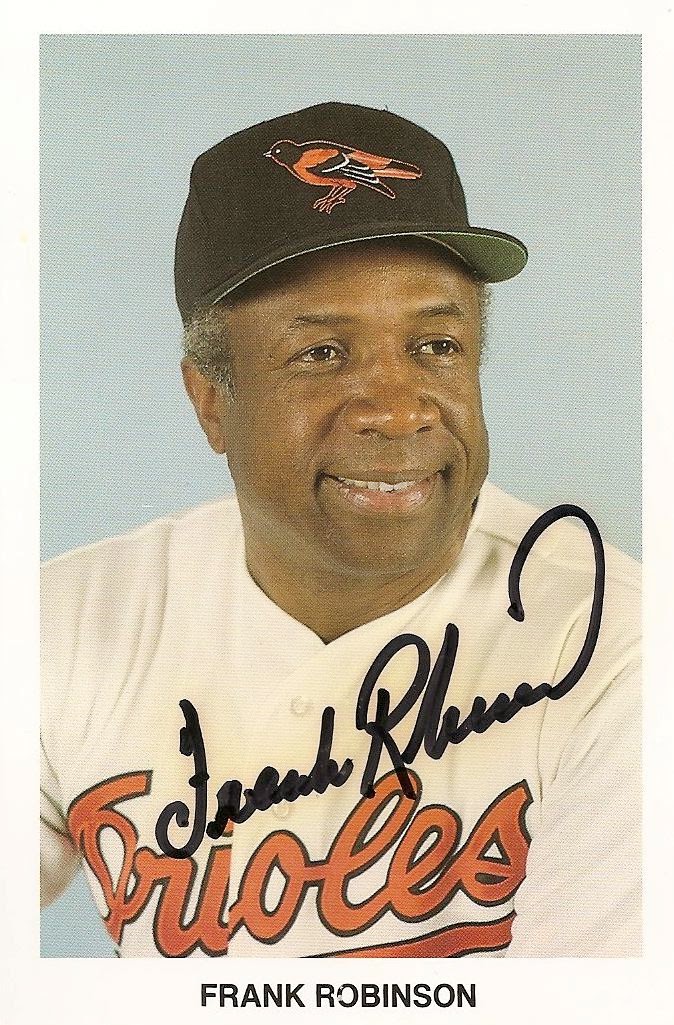 I just got home from an incredibly tense playoff opener that turned into a laugher right at the end. The Orioles got home runs from Nelson Cruz and J. J. Hardy to carry a tenuous 4-3 lead into the bottom of the eighth inning, and then broke out for eight runs on six hits, two walks, and a pair of Tigers errors in a 34-minute at-bat. Detroit used four pitchers, to no avail. The sellout crowd was lively all night long, but they/we truly started having fun in that big inning, chanting "Nick Mar-ka-kis" for the longtime O's outfielder who was finally participating in his first postseason game, and eventually taking a page from pro wrestling fans by chanting "this is awesome" before moving on to "we won't stop", the three-word slogan that the Birds have adopted for October 2014. 12-3 final, a new playoff record for runs scored by a Baltimore team. They'll do it again at noon tomorrow, and I'll try to keep tabs on things from my cubicle.

What does this superb autographed Frank Robinson postcard have to do with anything? Nothing, really, except that it's another wonderful Oriole-related item. Frank did push the Birds to their first World Series triumph back in 1966, of course. This was the big-ticket item in yesterday's mailing from Randy. I'm very glad to have it, just as I'm glad to have seen a Division Series victory by the O's.
Posted by Kevin at 10:54 PM