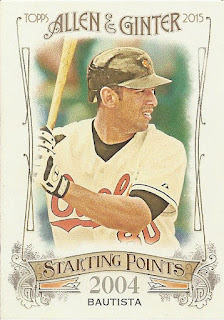 This card might make you a bit queasy, since it's a reminder that the Orioles once employed - and cut loose - a player who a) has gone to six straight All-Star Games while playing for a division rival, posting a 156 OPS+ in that span and winning a pair of home run titles, and 2) is a malcontented pain in the ass who has recently butted heads with Baltimore favorites ranging from Adam Jones to Darren O'Day. This card came in the massive mailing from Randy a few months back, and I both love it (for documenting an otherwise-overlooked piece of O's history) and hate it (for the above reasons).

That the wayward Orioles of the 2000s managed to snatch up Jose Bautista from Pittsburgh in the Rule 5 draft, only to lose him on waivers to Tampa Bay after a dozen plate appearances, is a joke that writes itself. But even I can't beat up on the Birds too badly for that one. As has been well documented, "Joey Bats" was passed around like currency in his 2004 rookie year, going on to play a dozen games with the Devil Rays before being sold to the Royals, for whom he appeared in 13 games...and then he changed teams twice on July 30 alone . KC traded Jose to the Mets, who turned around and swapped him to the Pirates in the Kris Benson deal, bringing him full-circle in seven and a half months. Even then, Bautista was a mediocre player throughout his time in Pittsburgh, and still didn't crack a 100 OPS+ in 2009, his first full season in Toronto. So what are the odds that Bautista was going to break out at age 29, after 575 so-so games in parts of six big league seasons? It doesn't serve as much more than an annoying little glimpse into an alternate reality.
Posted by Kevin at 10:22 PM 2 comments: 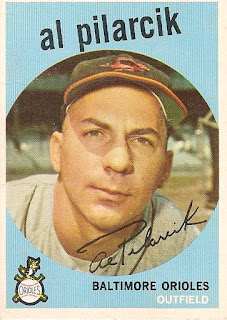 By about 8:00 this evening, I felt as weary and disenchanted as Al Pilarcik looks in this photo. I had barely been home since 6:00 this morning, and Janet and I had been wandering through the mall for 90 minutes or so. (As an aside, I'm pretty sure it was 115 degrees inside of that place. I would've stripped down to my boxers, but that didn't go over well the last time.) On the plus side, we made a big dent in our Christmas shopping. If I'm not overlooking anyone, there are about folks left on the to-buy list. There have been so many errands and events over the past few weeks that I assumed we'd be woefully unprepared for the holidays, but we're keeping our heads above water. The tree is trimmed, the front porch is decked with garland and white lights, and Janet's baking sugar cookies as I type this. I can't believe that Christmas is just a week away, anyhow. I'm looking forward to it, including our now-standard week with my in-laws in North Carolina. As long as I can steer clear of any more shopping malls, that is. 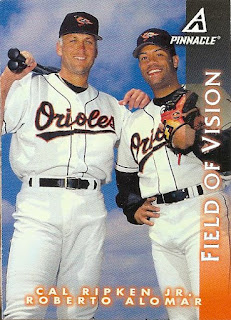 Mail call! This is just one card from the latest care package I received from prolific collector Max. As is typical for Max, the small padded envelope contained a goodly assortment of cards spanning the past few decades, from the widely-distributed base cards to some absolutely weird and obscure cards that will require some researching on my part. Though these cards were sent to our old address, they still made it into my hands, so I'm also considering this to be the first card package I've received at the new house. It's only fitting that it came from Max; now maybe I'll finally send him the cards I pulled together months ago. (Note to self: do it. Do it now!)

As for tonight's featured card, it made me realize that Cal Ripken and Roberto Alomar spent only the first of Robby's three seasons in Baltimore playing alongside one another as a double-play duo. The club shifted Cal to third base in 1997, slotting in newly-acquired Mike Bordick at shortstop. But for one year, the Birds had one of the most star-studded keystone combos in baseball history.
Posted by Kevin at 10:57 PM No comments: 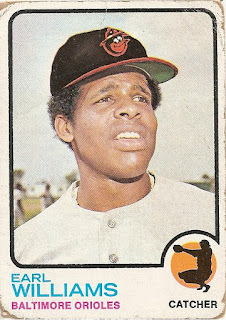 When some enterprising and likely underpaid card artisan at Topps was tasked with turning Earl Williams' Atlanta Braves cap into a Baltimore Orioles cap, I wonder how he reacted. Did he relish the challenge and embrace the whimsy of the goofy little orange-and-black bird? Or did he grumble and roll his eyes, wondering why Earl couldn't have been traded to the Cubs instead? This task might have been dumped on his desk at 4:30 on a Friday afternoon. He was just trying to run out the clock and then grab a few beers with the guys...and now this. No matter what the circumstances may have been, our anonymous Topps drone did a pretty good job with his thankless job. I mean, it's no 1975 Rudy May, but let's not let the perfect be the enemy of the good. 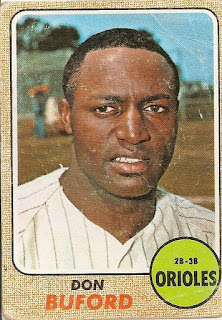 Quiz time! Why does Don Buford look so cheesed off?

a) He just got traded from the White Sox to the Orioles, and he knows that he looks ridiculous with his bare head and pinstriped jersey on a card that says "Orioles".

b) He spent the bulk of his time in Chicago playing second base and third base, positions that are well spoken for in Baltimore at the hands of Messrs. Johnson and Robinson. So he's just trying to figure out where he fits in with the Birds. (Hint: left field.)

c) Some fortune teller just told him that he'll make history as the first player to ever lead off a postseason series with a home run, doing so against Mets ace Tom Seaver in the opener of the 1969 World Series...but that some day he would have to share that distinction with a rodent-faced little dirtball named Dustin Pedroia.

d) Not only is this card woefully miscut, but whoever owned it for the first four decades of its existence allowed it to be creased, dinged, and scratched. Is that any way to treat an All-Star and the leadoff hitter for the 1970 World Champs?
Posted by Kevin at 10:42 PM No comments: