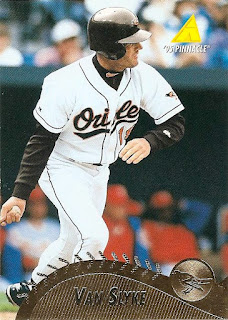 Today is Andy Van Slyke's 56th birthday, which I learned by reading Stacey's "Bird Droppings" post this morning at Camden Chat. She also linked to this blog, which was a swell thing to do, and which gave me that little extra push to write something tonight. I guess reciprocity makes the world go 'round.

Andy was a five-time Gold Glove center fielder, a three-time All-Star, and a two-time Silver Slugger, and he did exactly zero of those things in Baltimore. It would've been hard to squeeze such accolades into his muddled 17-game swing through Charm City in early 1995. So it goes. You may feel like you've heard the Van Slyke name more recently; indeed, Andy's son Scott has been a part-time outfielder and first baseman for the Dodgers since 2012. He's batted .249/.331/.424 in 821 career plate appearances, with 27 home runs and 92 RBI.

The elder Van Slyke shares a birthday, birth year and all, with former righty reliever and storied prankster Roger McDowell, who also had a mid-30s sojourn with the Orioles in the mid-1990s. Roger finished his 12-year stint in the majors with 41 appearances out of the O's bullpen in 1996, running up a 4.25 ERA while walking 23 batters and striking out just 20. Two decades later, McDowell has returned to our city as Buck Showalter's new pitching coach after a lengthy tenure in that same role in Atlanta. He's got his work cut out for him, to say the least.
Posted by Kevin at 11:32 PM 1 comment: 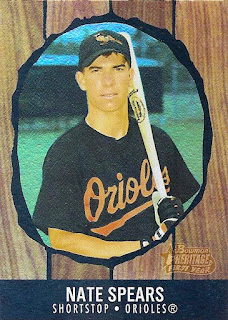 I know as much about Nate Spears as most of you do. Let's see...he was in the Orioles' organization in 2003, and he had wicked hat hair.

Fine, I'll dig deeper. Nate was Baltimore's fifth-round pick in the 2003 draft out of Charlotte High School in Punta Gorda, FL. He spent three years in the low minors with the Birds, and made good contact and took some walks. In 2005, he batted .294/.349/.429 with 30 doubles as a 20-year-old with the Frederick Keys, making both the midseason and postseason Carolina League All-Star teams. In January 2006, Nate was traded to the Cubs in the Corey Patterson deal. He continued his steady, unspectacular performance, winding up with a batting line of .268/.357/.398 in a dozen minor league seasons. In an outlier year, he clubbed 20 homers and drove in 82 runs with Boston's AA Portland affiliate in 2010. He had cups of coffee in the majors with the Red Sox in September 2011 and April 2012, unfortunately going 0-for-8 in all with four strikeouts. As of the 2016 season, he'd put away his bat and glove and joined the coaching staff of Boston's Class A Greenville Drive club.
Posted by Kevin at 11:12 PM 3 comments: 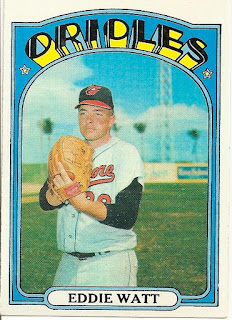 -The youngest of four kids, he became the first member of his family to attend college when he enrolled at Iowa State Teachers College. His alma mater later became known as Northern Iowa University.

-In 1961, he was scouted by the Cardinals, White Sox, and Orioles, but the first two clubs each offered him a $350 signing bonus. The O's sweetened the pot and got him for $400.

-He made his big league debut on Opening Day of the 1966 season - April 12 - and earned the save in Baltimore's 5-4, 13-inning win at Fenway Park. The stocky righthander struck out George Scott and got a pair of groundouts from Tony Horton and Rico Petrocelli in a flawless inning of work.

-His career-best performance in 1969 helped the Birds claim the first of three straight American League pennants: 5-2 with a team-high 16 saves and a 1.65 ERA in 71 innings.

-After Eddie's playing career ended, he managed in the Padres' farm system for four years, racking up a .524 winning percentage from 1978-1981. Later he coached in the minors for the Astros, Phillies, and Braves before retiring in 2003.
Posted by Kevin at 11:59 PM 2 comments: 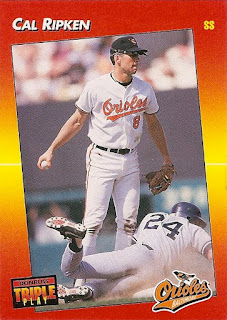 Look, Cal Ripken isn't a violent man by nature. But if Kevin Maas comes in too high with a takeout slide at second base, Junior is going to linger at the bag for just a moment, gripping the ball with a little extra oomph. Maybe he'll give a passing thought to spiking that ball off of Maas' helmet, but he'll think better of it. He'll bend down, just as the Yankee first baseman moves to get up and dust himself off, and he'll challenge Maas to a friendly wrestling match in the clubhouse. He'll grin at the younger player, his icy blue eyes glinting. Always keep them guessing.
Posted by Kevin at 9:59 PM No comments: 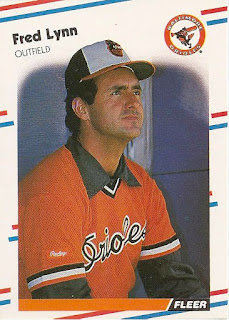 So there's this thing I do on this blog (or used to, in the long-ago when I didn't have to be shamed into writing by my restless readers) where I project thoughts, fears, delusions, etc. into the minds of the players pictured on my cards. For instance, even though this photo was snapped nearly 30 years ago, I might suggest that Fred Lynn is wondering what the hell we've all done to deserve a year like 2016. By now you know my personal laundry list of difficulties over the past calendar year: my wife's breast cancer diagnosis in March at 24 weeks pregnant (coinciding with the death of her grandmother), her subsequent treatment before and after our son Finn's June birth, Finn's cleft lip repair surgery in September, the financial stress of paying two mortgages until we finally rented out our old rowhouse IN NOVEMBER...hell, since the last time I posted back in *cough* October, my car battery went kaput and various tow truck snafus stranded me in my workplace parking lot for three-plus hours...and three weeks later, Janet got hit by an elderly driver making an ill-advised left turn just a few blocks from our home, WITH Finn in the car. (They're both fine, and her car will be, with Geico picking up the tab.) So I have plenty of reasons to tell 2016 to go piss up a rope before we even start talking about climate change, or Syria, or the Zika virus, or Brexit, or the neverending roll call of public figures dying, or Donald Effing Trump.

And yet...2016 brought me this daily source of joy, wonder, and warmth. 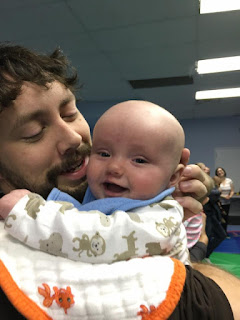 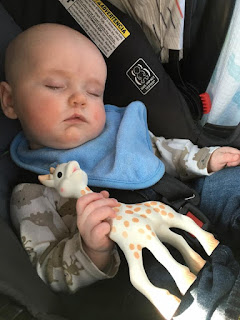 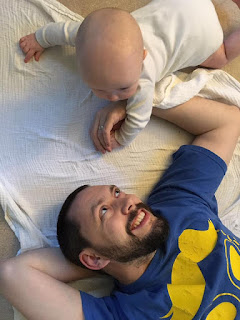 That's one major exception that proves the rule. As I've taken to saying in recent months, thanks for the baby, 2016. Now go away and never come back.
Posted by Kevin at 11:07 PM 6 comments: