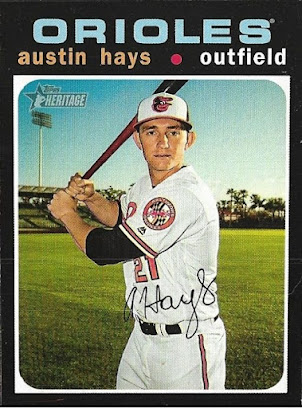 Gee, it only took me until July to pull an Orioles card from a 2020 product (and yes, it took me until August to post it...my bad). I'm still not buying a whole lot of new cards, but now that Topps Heritage has rolled around to the peerless 1971 design, I'm going to part with a few bucks here or there. I broke in with a blaster box from Target, and...eight packs, no O's. I got a D. B. Cooper card, though! So I had to wait for my next purchase (a hanger pack) to get my hands on current center fielder Austin Hays.
Speaking of Mr. Hays, I guess it's also time for my first regular-season recap of 2020! I mean, I don't know that "regular" is the best word to describe this 60-game summer sprint in ballparks devoid of fans but full of cardboard facsimiles, with a universal DH, expanded rosters, extra inning ghost runners, seven-inning doubleheaders (or is that 14 inning doubleheaders?), and expanded playoffs.
Anyhow, the Birds are exactly a quarter of the way through their condensed schedule, and they have a winning record at 8-7. They earned that eighth win the hard way last night, stumbling over the finish line just ahead of the host Phillies with a 10-9 victory in 10 innings. There were six ties or lead changes over the last five innings, which doesn't even take into account Baltimore pinch runner Andrew Velazquez's near-steal of home plate that was overturned by the killjoy umpires on review. Miguel Castro had his first poor outing of the summer in the eighth inning, coughing up a game-tying two-run homer to Bryce Harper followed by a solo shot by Jean Segura to put the Phils on top, 6-5. The O's bats picked him up in the ninth, as Renato Nunez's bases-loaded single knotted the score again. But it looked like they'd blown a chance to put up a crooked number when Pedro Severino popped up near the mound with two outs...until Segura raced over from third base, calling off first baseman Rhys Hoskins, only to stumble over the mound and miss the catch. With the runners moving on contact, two Orioles scored and they carried a two-run lead into the home half of the ninth...just like the eighth.
Current head honcho of the Birds' closer-by-committee approach Cole Sulser got two quick outs before losing his command and loading the bases on a single and a pair of walks. That set the stage for Didi Gregorius to pull the Phillies even again with one of the weakest bits of contact all night, an excuse-me single to very shallow center field. Sulser escaped with a strikeout of Segura, who couldn't redeem himself for his two-run gaffe in the field. That set the stage for Baltimore's second extra-inning game of the Bonus Runner Era.
Velazquez, having made the final out of the Oriole ninth inning, was placed on second base to start the tenth. Austin Hays led off and rapped a sinking line drive to center field. Philly center fielder Roman Quinn, trying to prevent Velazquez from scoring the go-ahead run, made an ill-advised lunge and came up empty. Hays streaked around the bases as the ball rolled to the wall, and Quinn's stumble-and-throw meant that Austin scored standing up. It was more of a little-league homer, but the official scorer's opinion is what really counts, and by that metric, it was the first inside-the-park homer in Birdland since Robert Andino rounded the bases against Boston nine years ago. The Orioles needed both of those runs, since Paul Fry had his own dose of ineffectiveness and poor positioning in Philadelphia's last at-bat. The lefty surrendered a leadoff Jay Bruce single to score Segura (man, that rule is goofy), and later deflected a possible game-ending double play grounder with his foot. A miscommunication between Fry and Severino led to a passed ball that put the tying and winning runs on second and third, and it took a heady play by shortstop Jose Iglesias to freeze the runners on a grounder by Quinn. Travis Lakins, Sr., one of the newest Orioles, relieved Fry and coaxed a grounder to second base by Hoskins to nail down his first career save in MLB. At long last, I exhaled.
I will admit to turning off the video feed of the game twice in late innings before tuning in to the O's radio call just in time to...miss the decisive Hays trip around the bases. But I stuck around (against my better judgment) to hear the white-knuckle exploits in the bottom of the tenth. It's been a while since I lived and died with every pitch like that, and I really did miss it.
Posted by Kevin at 9:26 PM 4 comments: