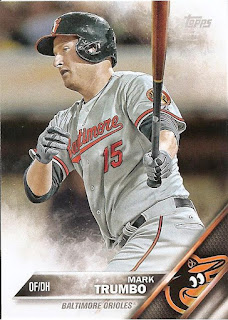 It's been nine years (nine!) since I started blogging about baseball cards, so I couldn't let the entire month of January lapse without touching base. Thanks to last weekend's FanFest, I've got some experiences to share that I hope will be worth the wait.

Since Finn wasn't born until late June, Saturday's midwinter shindig doubled as his first visit to Oriole Park at Camden Yards. We're already excited about bringing him back in a few months to get his "first game" certificate. 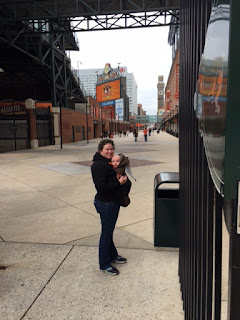 Thanks to the early (10:00 AM) entry time for season ticket holders, we were able to scope out the main hall of the Convention Center before the larger crush of people streamed in. Among other things, we won free admission to the Babe Ruth Birthplace and Museum by spinning their prize wheel, bought this year's Orioles/BARCS Pet Calendar (I love J. J. Hardy's goofy-looking retriever), invested in some O's cards in the form of three late 1990s team sets for five bucks, and even scoped out the team-sponsored authenticated game-used stuff. Of particular interest were the actual lineup cards that are posted in the dugout for each home game; after a few minutes of searching, we found the card for the second game of the June 25 doubleheader vs. the Rays - Finn's birthday. After some friendly haggling, we brought it home with us. The plan is to get it signed by as many players as we can at the midseason event for season ticket holders, and to have it framed and hung in the kid's room. 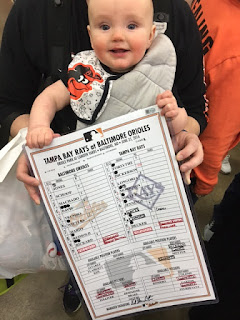 There was a crowd around the bank of tables for the team's minor league affiliates, but we stuck around long enough to snap photos with Bowie Baysox mascot Louie and Frederick Keys mascot Keyote. I can't remember what had drawn Finn's attention in the latter shot, but I suspect that it was nothing in particular. Kids. 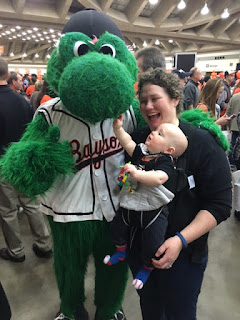 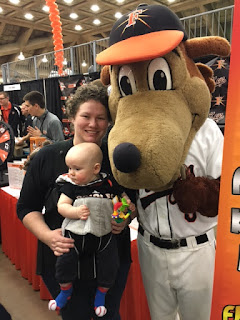 About the time we started feeling claustrophobic, I checked the FanFest brochure and saw that one of the kid-friendly events being held on the third floor was "Drumming with Caleb Joseph"...and it was starting in ten minutes. So we hustled upstairs and spent a half hour listening to Baltimore's delightful backup catcher as he answered questions from children and showed off his self-taught skills on the drums. Caleb performed a medley that included selections from "Eye of the Tiger", "Limelight", "Don't Stop Believing", and "Let It Go"...yes, the Disney song. He does have a toddler, after all. More impressively, he drummed along to the entirety of Rush's "Tom Sawyer" by request. I really hope #36 is able to rebound from last year's dismal offensive performance, because he comes across as one of the most personable, friendly guys you could meet. 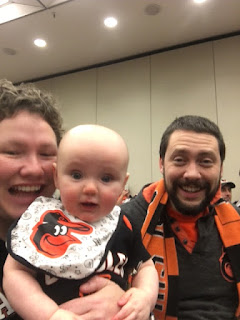 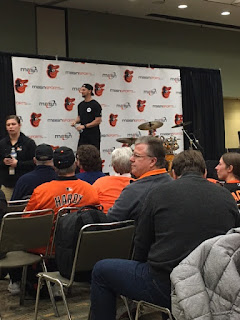 On our way to Caleb's jam session, we'd notice that there was a photo station set up on the second floor. A five-dollar donation to the Orioles' Shannon's Fund charity got you a picture with whichever player happened to be on shift. At the time we'd passed it, Mychal Givens was there. When we came back to take our place at the end of the line, Christian Walker was up. But while we were waiting our turn, one of the volunteers came by and announced that our player would be the recently-signed Mark Trumbo. Good news! So here's the kind of cutting-edge insight you've come to expect from me over the years: Mark Trumbo is a large mammal. For comparison's sake, I'm about six feet tall; you'll see below that the 2016 MLB home run king towers over me. Our turn finally came and we exchanged greetings with Mark. I offered to let him hold Finn for the photo and he politely declined. He probably noticed that our seven-month-old was content in my arms and didn't want to mess with what worked...or maybe he was self-conscious about his defensive abilities. 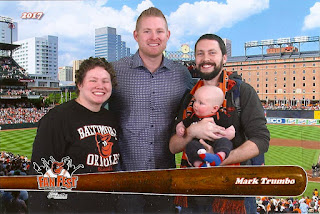 After a detour for lunch at the Pratt Street Ale House (I strongly recommend the roast turkey sandwich), we toured the O's clubhouse in Oriole Park at Camden Yards. The tour takes you through the weight room and the locker room (I think the shuffleboard table was a new addition since the last time I'd been on the tour), spills out into the home dugout, and then into the interview room where Buck Showalter dispenses his unique brand of insight before and after each home game. We also got a photo print there, but this one was free. You'll notice that Finn reached for the microphone just as the picture was being taken. Why? Because it was there. 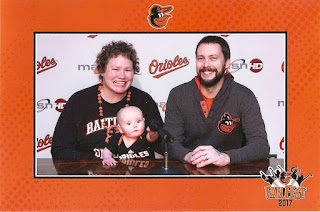 So there you have it, another FanFest in the books. It was exhausting, in a good way. Now we just have to endure the two months that separate us from real live baseball games that matter.
Posted by Kevin at 10:40 PM 8 comments: