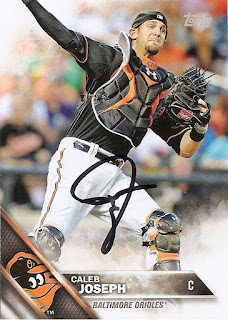 I swear that I wasn't going to do the baby thing again tonight, but then Caleb Joseph tied a career high with four hits in as many at-bats, helping spoil Matt Wieters' return to Baltimore as the O's beat the Nationals, 6-4. That's five straight wins, folks.

So what does this have to do with my first-born? Well, two weeks ago, Caleb made a Saturday afternoon appearance at Point Breeze Credit Union in Westminster. Janet, Finn, and I jumped at the chance to say hello to our favorite person on the team. (Well, maybe Finn was mostly just along for the ride.) As it turned out, we arrived at 12:15, just as the shuttle showed up to deliver Joseph. It was pretty cool to see a good-sized crowd already lined up inside the bank, cheering for the team's backup catcher as he made his slightly belated entrance. He apologized for being late, and jokingly blamed the team rep that had accompanied him.

When we got to the front of the line, we introduced Caleb Joseph to our Finn Caleb, and told him that we'd even debated naming him Caleb Joseph...but Janet "thought it would be weird". Caleb's well-reasoned response was that "everyone has to be named for somebody". 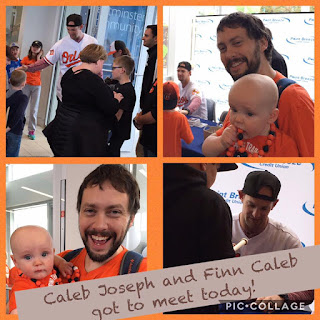 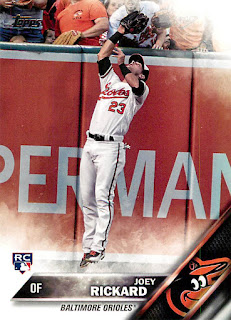 I'm still floundering about trying to re-establish blogging as a routine, but I love showing off photos of my ridiculously photogenic son (not that I'm biased or anything), so that's the angle tonight. Earlier today, the Orioles played the 2,000th game in the history of Oriole Park at Camden Yards, and it also happened to be Finn's first. He must have brought them luck, because #2,000 resembled #1: a shutout win for the O's.

I wouldn't have guessed the outcome from the way the game started. Chris Tillman got the call after missing the first month of the season with an ouchy shoulder, and started by throwing nine balls in his first ten pitches. But the White Sox squandered a bases-loaded opportunity en route to an 0-for-7 performance with runners in scoring position. Tillman seemed to discover his command as the game wore on, allowing three singles and three walks in five scoreless innings. Alec Asher bridged the gap to the ninth inning, scattering five hits in three and a third frames. After he yielded back-to-back singles with one out in the ninth, Brad Brach came on to earn the save. The first batter he faced, Leury Garcia, hit the ball right back to the mound, and Brach started the 1-6-3 double play.

All of the scoring happened in the first two innings against Chicago ace Jose Quintana, who was uncharacteristically wild. Adam Jones and Manny Machado drew back-to-back walks in the bottom of the first, and Mark Trumbo followed with his specialty, an infield single. A Chris Davis sac fly put the Birds on the board, and rookie Trey Mancini knocked in Machado with a single to right field. The O's put up another two-spot in the second, thanks to base hits by four of the first five hitters in the inning. Jones and Machado each drove in a run. Joey Rickard, everyone's favorite doe-eyed Royal Farms spokes-outfielder, was named Player of the Game on the strength of a 3-for-5 performance with a double, a run scored, and a stolen base.

I won't pretend that Finn paid rapt attention to the game; he is ten months old, after all. He was far more interested in grabbing the cap off of my head and the sunglasses off of Janet's face, when he wasn't staring at the other fans in the rows behind us. He was also quite enamored of Janet's Dippin' Dots, and once he started fussing in the late innings, she was fortunately able to cover him with a blanket and get him to sleep. But we did get his "first game" certificate from Fan Assistance, and we have these excellent photos to remember the day. 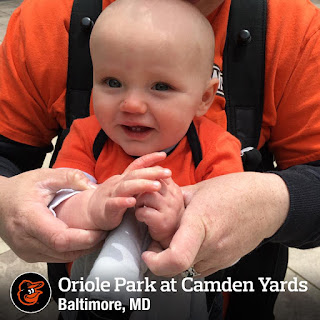 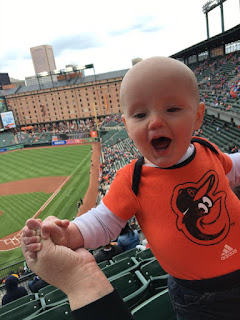 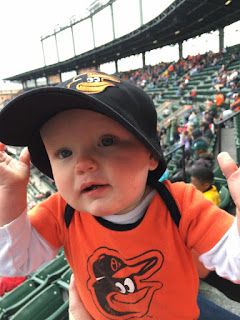 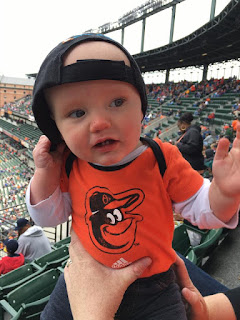 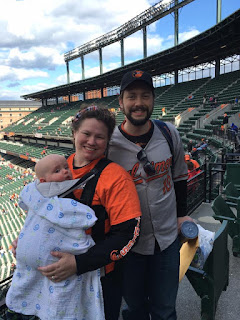