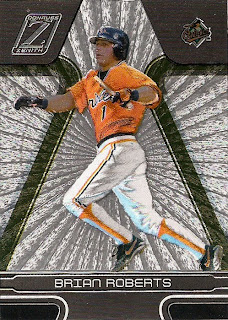 It's not like I need an excuse to post another Brian Roberts card. If you're keeping score, this is the 19th time he's been featured in this, the 32nd month of this blog's lifetime. But when my favorite current Oriole hits the second walkoff home run of his career (and his first homer in a painfully injury-and-illness-shortened season) for the team's third walkoff win of the homestand and league-leading ninth such win of the season, thereby capping a three-to-one series win against the first-place White Sox and clinching the first back-to-back series wins of the mostly-heinous 2010 Orioles season, to say nothing of a 6-1 homestand under brand-new manager Buck Showalter, well...that's a no-brainer.
As I mentioned, only one of Brob's 77 previous longballs ended a game. I remember that one well, as it came in the midst of his breakout 2005 season and delivered a ten-inning triumph over those blasted Yankees. It put New York four games behind the second-place O's (yes, that's before that particular Jekyll-and-Hyde season went straight to hell). Brian showed a flair for the dramatic by depositing veteran reliever Mike Stanton's first and only pitch over the fence. Last night, perhaps because he's still shaking off the rust, he settled for Chicago pitcher J.J. Putz's second offering.
Though the Birds have won nine games this year in their final at-bat, this was the first one that concluded with a euphoric trot around the bases. It left me wondering how many times each member of the current team has delivered a walkoff blast. Here's what I found, with an assist from Baseball Reference's Home Run Logs:
-Matt Wieters hit the O's last walkoff homer last September 16 off of Tampa Bay's Russ Springer with nobody out in the bottom of the ninth in a 2-2 game. It was a two-run shot, and took Jim Johnson off the hook for allowing the game-tying blast to Ben Zobrist in the top half of that inning.
-On July 19, 2008, Luke Scott memorably broke up a 10-10 stalemate with a towering shot to deep right field against Detroit's Freddy Dolsi to give the Birds a 10-inning victory in a wild game. I wrote all about it in a previous blog entry.
-Nolan Reimold (yes, I'm still including him) capped a resilient Baltimore effort with a three-run clout in the bottom of the 11th to deliver an 12-10 win on May 27, 2009. The Orioles rallied from an 8-3 eighth-inning deficit and a 10-8 11th-inning hole as the rookie's fourth career home run was one to remember.
Aaand that's all. Five walkoff home runs by three current members of the roster and one current Norfolk Tide. I was surprised that Nick Markakis isn't on this list. I'd say he's due...
Posted by Kevin at 10:15 PM

Team Phungo was in attendence for the first B-Rob walk-off and it likely ranks as one of the best games I have seen.

I can still see the ball fly into the LF stands. Great moment at the Yard that night.

There have been a few bright spots during the O's lean years and that certainly was one of them.

deal - Good for you! I can only recall attending one Oriole walkoff win, and it was relatively dull. On April 12, 2007, the Birds beat the Royals 2-1 on a Jay Gibbons single in the 10th inning. It was freezing cold.

On the other hand, I saw Steve Trachsel, Chad Bradford, Jamie Walker, Danys Baez, and Chris Ray hold a team to a single run in ten innings...even if it was Kansas City, that's got to be a rare phenomenon.