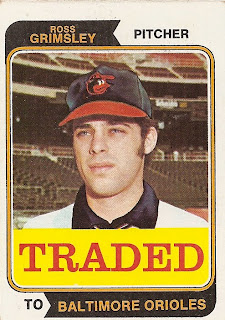 1974 marked the first year that Topps released a supplement to their basic set late in the year to highlight players who had changed teams during the season. They certainly didn't just dip their toes in, or wade in gradually. Topps absolutely took the plunge, slapping a caution-tape-yellow strip at the bottom of the player picture that took up nearly a quarter of the card's real estate. In case they still didn't have your attention, the blood-red "TRADED" label should have done the trick. It's almost reminiscent of a wanted poster; at any rate, Ross Grimsley's expression is world-weary. He's squinting off into the high noon sun, preparing for an Old West showdown with guns drawn. Ross knows that he's not coming back. In a manner of speaking, this was the end of Grimsley as he had previously been known. In 1975 he grew a bushy mustache and grew his hair out into a shag, and within a year or two it was teased into a buoyant thicket of curls that transformed him into the Caucasian equivalent of Oscar Gamble.
On another note, it's somewhat ironic that the "Traded" name was rendered outdated almost immediately. On December 16, 1974, an arbitrator ruled that Oakland pitcher Catfish Hunter was baseball's first free agent, as owner Charlie Finley had breached his contract. Two weeks later, Hunter signed with the Yankees for big money. Several other players began the 1975 season without signed contracts, as the emergent players' union challenged the reserve clause that had made player movement a one-way street. By the end of the season, pitchers Andy Messersmith and Dave McNally had played all year without inking deals. Again, they were ruled free agents, and this time the reserve clause was gone for good. Topps did not issue a Traded set in 1975, but brought it back the next year. They kept the "Traded" name, even though it would have been more accurate to dub it "Traded and Free Agents". It was another five years before the next supplemental set, but when it returned it was still "Traded". In fact, Topps kept putting out Traded sets through 2004, although the scope of the set had also expanded to incorporate rookies who emerged during the season. Since 2005, Topps has gone with the unwieldy but more inclusive "Updates and Highlights" brand name.
Posted by Kevin at 8:18 PM

i was always a big fan of the 1972 hign numbered traded cards - the spiritual fore-barer of this set. seven perfectly daffy cards than when i put that set together put me back a pretty penny. they even had your boy f-rob in his new dodgers threads.

Max - Oh yeah, I forgot all about the 1972 Traded cards. Guess I was running low on sleep.