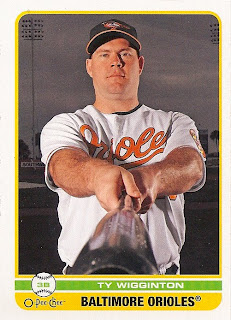 Last night I suggested, somewhat tongue-in-cheek, that Albert Belle was some sort of terrible, hulking creature fueled by his own fury and the fear of mortals. If you watched tonight's Orioles game, you know that the real enforcer is Mister Ty Wigginton. In the top of the sixth inning, with neither team having yet scored, young pitcher Brian Matusz gave up a gapper to right-center field. As Nick Markakis came up with the ball, the hitter (Andres Blanco) tried to stretch it into a triple. Markakis hit his cutoff man, Brian Roberts, who fired a strike to Wigginton at third. It was a bang-bang play, but the hydrant-shaped infielder expertly blocked Blanco's headfirst slide with a well-placed knee. He plucked Roberts' high throw out of the air and slapped the tag down in time for the crucial out. Blanco's momentum caused his head to collide with Wiggy's elbow, adding injury to insult. He popped up from the bag and began jawing at Ty while his third-base coach tried to guide him toward the dugout. Wigginton went chest-to-chest with the Ranger second baseman, shouting back at him and pointing toward the visitor dugout, telling him that he was out and should grab some bench. The bullpens slowly emptied, but the altercation was diffused before it became a fracas. Blanco is a lucky man; if they had come to blows, he might have had to crawl back to the clubhouse afterward.
Oh, and Wiggy went 1-for-4, Matusz pitched eight innings of five-hit, six-strikeout ball, and Corey Patterson, Brian Roberts, and Nick Markakis drove in runs in a four-run seventh inning. Orioles 4, Rangers 0.
Posted by Kevin at 10:01 PM

beautiful synopsis on why one should watch an O's game in a tough season when Mid August approaches. Glad to see the Orioles putting up a fight.

Yeah, if you watch the games you can usually find one or two vignettes to justify the time spent. Another highlight came late in the game when Adam Jones was hit by a pitch on the forearm. Buck Showalter and the trainer came out to check on him, and when they turned around to leave, Adam swatted Buck on the rear end!

The Rangers are indeed 0-5 against the O's, and 12-22 against the East overall. It doesn't bode well for them in the playoffs...

Wigginton is becoming one of my favorite Orioles because of his no nonsense attitude, hardnose play and the shenanigans on the field. Not to mention he plays the game the right way, every day. I wouldn't mind seeing him stick around after this year.

Great game, I was there in the 10th row behind the visitors dugout. I've never been at a game where they've brawled, I was really hoping with such close seats.

The O's are now 7-7 in games I've attended, amazing considering I started off the year 1-6. I'm going tonight in what might be my last game of the year. Can they break .500 or should I have left well enough alone?

You guys missed the 'pleasure' of hearing Milo Hamilton exclaim "Get Wiggy with it!" Or maybe not.

Ryan - He can come back if he likes, but I hope it's as a utility player.

Bob - MASN blogger Roch Kubatko has used that phrase in at least a half-dozen posts this year alone, I'm sure. So we're not safe here in Baltimore.