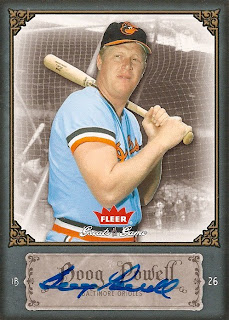 Not much time to blog today, as I was at the ol' ballpark tonight. Just wanted to pass along birthday wishes to John Wesley Powell, "Boog" to you and me and millions of fans of baseball and barbecued meats. The Booger turns 69 today. Of the 339 home runs that he hit over the course of his career, just two fell on his birthday:
-August 17, 1970: In the bottom of the seventh inning in Milwaukee, Jim Palmer gives up two runs to tie the game. Boog hits an eighth-inning solo shot (his 29th of the season) off of Lew Krausse that gives the Orioles a 3-2 lead over the Brewers. They would win by that score, boosting Palmer's record to 17-7.
-August 17, 1971: Again, the O's are in Milwaukee. Again, they score late and pull out a 3-2 win. Again, Boog shifts the momentum with an eighth-inning blast - this one a game-tying two run shot off of Marty Pattin. It was his 17th homer on the year, as injuries cost him 30 games. Eddie Watt picked up the win in relief of Dave McNally, thanks to an Elrod Hendricks home run to lead off the ninth inning.
Posted by Kevin at 11:12 PM