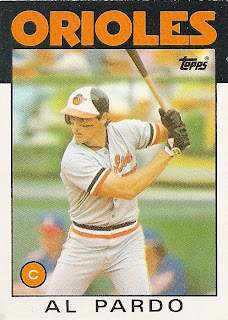 Last night I posted a 1982 Topps card to commemorate the year of my birth. I didn't have time to write my usual self-indulgent birthday post today, but it was a good day. I'll do some show and tell from the National tomorrow, but for now I present a 1986 Topps card in honor of Ryan Petzar, an Orioles and Phillies fan from York, PA. I've gotten to know Ryan via Twitter, which is one of those uses that I never imagined when I signed up for an account a few years ago. Today we finally met at a Q and A/meet-and-greet session that was hosted by Topps at the Convention Center. Since Ryan is a young'un and was born in 1986, this set appeals greatly to his nostalgic side.
Because I chose the most anonymous Oriole in the set, I'll offer a bit of biographic info. Al Pardo is one of just four players in major league history to have been born in Spain (Oviedo, specifically). His middle name is Judas, oddly enough. He played 34 games for the O's as a rookie in 1985, hitting a sizzling .133 with a single run batted in. The following year he returned for 16 games and "improved" to .137 with a home run (against Chicago's Joe Cowley) and three RBI. After leaving the Birds, he played only three more MLB games, all with the Phillies in 1988-1989. He was 0-for-3 to leave his career average at .132 with a .322 OPS and an OPS+ of -11.
Hey, he played for the Orioles and the Phillies. I swear that I didn't even plan for that when I picked this card. Spooky.
Posted by Kevin at 11:27 PM

Hey my birthday falls on a Friday later this year and I was born in 1976. Any chance you can devote a vintage Friday to me? It's in October so there shouldn't be any Orioles news anyway.