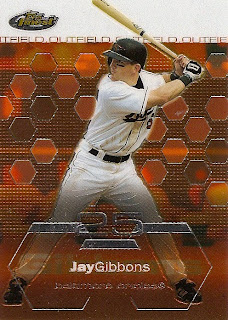 He's baaaaaaack...
Nearly three years to the day that he played his last major league game, Jay Gibbons was recalled from AAA Albuquerque to take Garret Anderson's place on the Dodgers' major league roster yesterday. He pinch hit for starting pitcher Ted Lilly in the sixth inning and delivered an RBI single to extend L.A.'s lead over the Nationals to 6-3. They would ultimately win 8-3.
It was starting to look like Jay's strikeout in a ninth-inning pinch-hit appearance on August 12, 2007 would be his final big league at-bat. He missed the rest of that season due to injury and was implicated shortly thereafter in the Mitchell Report for performance-enhancing drug use. He hit .189 with no home runs in spring training in 2008, and the O's released him with two years left on his multimillion dollar contract. When he couldn't catch on with another team, he went to the independent Long Island Ducks of the Atlantic League. He wondered (publicly and privately) if he'd been blackballed for his PED choices, even though many of the other active players in the Mitchell Report had continued to be employed by MLB teams. Gibbons embarked on an odyssey that took him from Long Island to Huntsville, AL to Nashville, TN to Newark, NJ to Venezuela to Albuquerque, NM, and finally to Los Angeles. He'd spent the second half of 2008 with Milwaukee's top two minor league teams and saw action with the Marlins in the Grapefruit League in 2009, but it took four months of torrid hitting in the admittedly offense-friendly Pacific Coast League (.347, 28 2B, 19 HR, 83 RBI) combined with an outfield crunch at Dodger Stadium (Manny Ramirez is injured, and Garret Anderson is washed up) to finally get Gibby back to The Show.
I wish nothing but the best to Jay Gibbons, who I liked well enough when he was with the O's. Sure, he still got his $11-12 million from the team while he was slumming it for the past three years, but I'm a sucker for comeback stories.
If you get a moment, click the link to that Orioles-Red Sox box score from August 12, 2007. Steve Trachsel? Paul Bako? Ramon Hernandez? Jay Payton? Tike Redman? It might not look that way in the loss column, but things really are better now than they once were.
Posted by Kevin at 8:24 PM

night owl - Best of luck with him! If nothing else, he should provide some lefy pop off the bench.