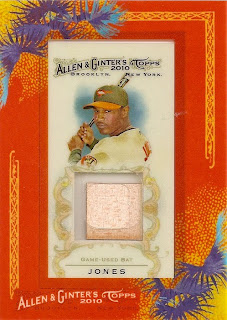 Okay, the world has stopped moving long enough for me to share my impressions and purchases from my return trip to the National on Friday. Since I had to put in a full eight hours at work, I didn't make it downtown until three in the afternoon. I was supposed to meet Ed at the entrance to the hall, but he was about fifteen minutes late because he got sidetracked due to a conversation with former Baltimore Colts linebacker Mike Curtis. As excuses go, that's a pretty good one. Ed gave me a few Ravens crab mallets that he'd picked up at the Baltimore Sun booth, and in return I loaned him some summer reading. Searching for 1970 Seattle Pilots cards the previous day reminded me that he'd never read Ball Four, so I took matters into my own hands.
Near the entrance, former Cardinals, Reds, Tigers, and Nationals player Dmitri Young was handing out free autographed posters at a memorabilia dealer's booth. "Da Meat Hook" is an avid collector himself, and he had brought along several of the crown jewels of his collection for display. Included in the glass case in the crummy iPhone photo below are rookie cards of Brooks Robinson, Pete Rose, Roy Campanella, Hank Aaron...all graded perfect 10. I can think of worse ways to spend your major league salary. 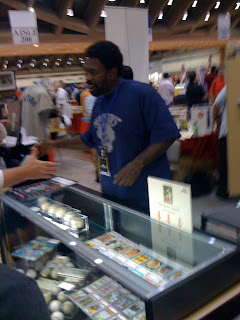 Shortly after arriving, I called and met up with fellow collector and Orioles fan Craig, a reader of this blog who came up for the week from Virginia. He really seemed to be enjoying himself, and even had the good fortune to be at Camden Yards for a few O's wins along the way. We parted ways and I went window-shopping at a booth that had three racks of game-worn baseball jerseys from the past few decades. No stars, of course, but it was a treat seeing and handling the uniforms of several familiar names. Among the Orioles were forgettable infielders Kelly Paris and Luis Garcia, hitting coach Rick Down, and pitcher Jose Mercedes. The coolest non-Oriole threads may have been the Montreal Expos jerseys, and perhaps the powder blue 1980s Braves number with "BB" (for batboy, of course) on the back. If I had the kind of disposable income that would allow me to drop $150-$200 for secondhand clothing, I would've gladly patronized that seller.
My first purchase of the day was four relic cards for three bucks a piece, one of which was the Adam Jones bat relic that you see above. The others were a Brian Roberts bat relic from the same set and two jerseys relics that will be stashed for future disbursal to blogger friends. Mystery abounds again!
Next I set out in search of a hobby box. As much fun as it was rooting for singles, I couldn't leave without giving myself a big mess of packs to rip. It was harder than I had anticipated to find a box of Upper Deck's 2009 homage to O-Pee-Chee, but I ended up getting one from Pittsburgh Sports Wholesale for $40. Maybe I'll actually complete that set at some time in the murky offing. I'm one-third of the way through the 36-pack box, and I've gotten a few Orioles I didn't have (Jim Johnson, Radhames Liz, and a black-bordered Oriole Park photo/team checklist) as well as this nifty Padres checklist with a lovely photo of Petco Park. I will look at it often and brainwash myself into flying out to San Diego again soon. 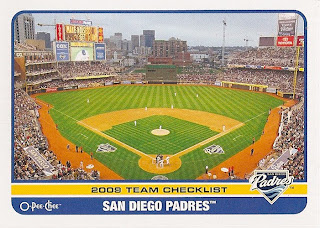 I only had a little over an hour left before the day's activities came to a close at six in the evening, so I intended to simply return to Bill Henderson's table to resume pillaging his ten-cent 1970s boxes. But I was distracted by a table full of modern-day dime boxes, and figured that I might as well see if I could knock off a few Orioles needs. I grabbed some '52 Rookies from 2006 and 2007, some 2010 Heritage High Numbers, 2007 Allen and Ginter, 2005 Bowman Heritage, and a few others. You'll likely see them sooner or later. For now, I'll show off the Albert Einstein card that was my favorite random pick from the thirty-card haul. 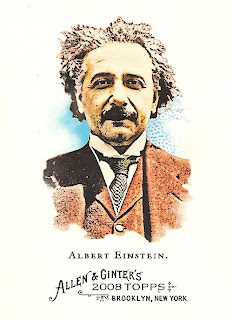 While I was hunched over one of the inner tables that this dealer had, I overheard a spirited conversation between two Phillies fans behind me. After several minutes, I was entertained enough that I decided to turn around and chime in...at which point I discovered that Ryan and Mike (both of whom I'd met on Thursday) were the guys in question. We spent several minutes joking about players and cards that we found in those boxes, and it was nearly 5:30 by the time I finally pulled myself away for a speed-shopping session at Bill Henderson's.
I only had time to pull 100 cards from Bill's 1970s boxes on this occasion, so I grabbed a pair of one-dollar cards from the top of another box to round it off at $10: a 1960 Topps Johnny Podres and a 1976 card featuring the previous year's American League wins leaders: Jim Palmer, Catfish Hunter, and Vida Blue. It wasn't until I was sorting my cards the next day that I saw that this was an O-Pee-Chee card. Not a bad surprise. 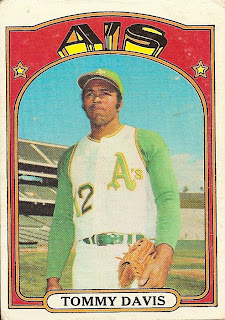 I understand that the National won't be back on the East Coast until 2014, when it comes to Atlantic City. For the next three years it will be in Chicago and Cleveland. Now that I fully comprehend the grand scale of this convention, I might have to make some long-term plans to take a few days off in a year or two so I can a) sightsee in another city and b) not rush myself.
Posted by Kevin at 10:25 PM