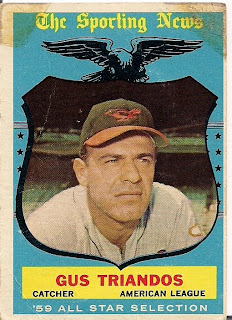 This magnificent fifty-year-old All-Star card of Gus Triandos has lost a bit of its luster. Back in the early 1960s, some towheaded little scamp wanted an easy and affordable way to display his favorite cards. Ultra-Pro binder sheets were just a wonderful fevered dream at that time, so he took his mom’s dumb old photo album and pulled out all those boring pictures of his little sister, and inserted his cardboard treasures in their place. But how to make them stay in place? Luckily, the ‘rents had a roll of Scotch tape lying around! Little Junior didn’t give much thought to the effects that adhesive, combined with six decades of exposure to the elements, might have on his collectibles. After all, some of those words sound vaguely sciencey, and that’s the kind of junk they make you learn in school! So here we are, far into the future, and his card has fallen into the possession of a grown man with a full-time job and a mortgage who has too much time on his hands and is obsessing about those yellowed corners that aren’t even sticky any more.
This is why I don’t obsess about condition when it comes to vintage cards. Think of how dull this card’s backstory would be if Junior had snuck it into Dad’s fireproof document box instead.
Posted by Kevin at 9:01 PM

That's a great card, Kevin. At least the little guy didn't stick it on his bike with a clothespin, between the spokes.

Doug - Nor did he pop a hole through it with a hole punch. That's a teaser for a future post...