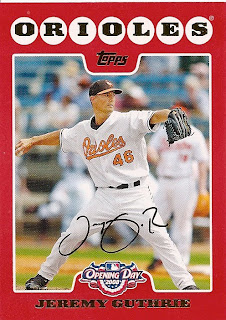 Tonight I have a legitimate excuse for posting at a late hour. I've been out at Oriole Park helping to give Buck Showalter a warm welcome to Baltimore. The fact that I had a voucher for a free upper reserve seat at any August home game (part of the team's birthday promotion) didn't hurt, and the free Felix Pie t-shirt giveaway was the icing on the cake. I made it a family outing by bringing along my sister and my cousin Brittany, who also took advantage of a free ticket a week before her 19th birthday.
The early returns on the Buck Era are positive. The Birds shook off a sluggish offensive start with a four-run outburst in the sixth inning to pull out a 6-3 win over the Angels. Luke Scott's booming two-run homer nearly reached Eutaw Street and gave the O's a lead that they did not relinquish. Rookie third baseman Josh Bell hit a two-run double for his first career extra-base hit and runs batted in. Matt Wieters added three hits and two RBI, and Felix Pie had two hits, two runs scored, and a stolen base on his special night. The pitchers held up their end of the bargain, as Jeremy Guthrie held the Angels in check with five hits allowed in seven brisk innings and benefited from some rare run support in earning his fifth win of 2010. The bullpen was perfect, with Mike Gonzalez breezing through five Halo batters (and even earning a warm ovation when he exited the field) and Alfredo Simon having a much easier night than usual in striking out the only batter he faced to end the game.
Although it was a typically sparse weeknight crowd (16,723 announced), those who came out were livelier than usual. Buck earned loud cheers for his every appearance, from a pregame video that aired on the scoreboard to the customary lineup card exchange at home plate to a brief trip out of the dugout to ask for clarification on a foul ball call by the home plate umpire. At several key points late in the game, the fans clapped and cheered when our pitchers got to a two-strike count without being prompted on the scoreboard (I hope that little bit of audiovisual overkill has been retired at the Yard). Just in case Buck needed a reminder that his Yankee days are far behind him, the video screen in center field showed highlights of New York's 8-2 loss to Toronto at the end of the eighth inning. The various Blue Jay scoring plays were received with raucous applause, and the lone positive Yankee clip - a home run by Mark Teixeira, of all people - was met with thunderous boos.
It's a small sample size, but the last two months of this season have a chance to be a little more fun than the first four.
Posted by Kevin at 11:55 PM

The home uniform coupled with the blue seats in the backround give the photo a Memorial Stadium feel to it.

Hopefully with this team almost 100% healthy now they can avoid a massive tailspin. Can Buck get this team to at least 50 or so wins? That'd be nice. The caliber of teams they play in September is going to be brutal, I seriously think they may flirt with 0-for-September. It could be a 2 or 3 win month, so August is crucial.

They may get a little bit of a break the final week of the season. They play TB and DET to close the season. Hopefully for the O's both of those teams will have clinched a playoff spot, be resting some of the regulars and not fighting & clawing to get into the postseason.

FTB - As sick as I am of the losing, I'd be happy just to see the young pitchers right themselves. It's worth noting that Wieters has been hot for the last month, with a .352/.460/.563 batting line, four doubles, a triple, three homers, and 16 RBI. He's got 15 walks and eight strikeouts, which is unheard of on this hack-happy team. So reports of his demise, at least, were exaggerated.