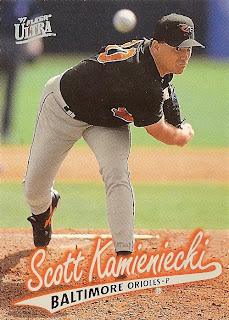 In recent years, the extensive length of the six-month, 162-game baseball season has been more of a curse than a blessing for Orioles fans. No matter how poorly or how well the first two-thirds of the season went, you could count on the Birds to crash and burn in August and September. This year, the "dog days" have actually allowed the club and its rooters to salvage something positive out of a season that ran off the rails from game one.
With one game left in the month, the O's have a record of 16 wins and 10 losses in August, thanks to the weekend road sweep of the Angels (whose ridiculous geographic identifier will not be repeated here). Holding a team - any team - to a single run in 27 innings is reason enough to celebrate, but it's also allowed the Baltimore faithful to breathe a sigh of relief. Before this month, the Orioles had not broken even for a full calendar month since June 2008. More astoundingly, it is the first winning August for the Birds since 1997 (they went 18-10 then, which was their seventh straight winning month spanning two seasons). It's probably not coincidence that there have been 13 straight losing seasons in the interim.
Just how long ago was 1997? Browse the names of the pitchers who won games for the O's that August. Arthur Rhodes swooped in from the bullpen to grab three wins. Mike Mussina had a pair, as did Scott Kamieniecki, Scott Erickson, Jesse Orosco, and Armando Benitez. Shawn Boskie, Terry Mathews, Alan Mills, Jimmy Key, and Rick Krivda rounded out the victory parade. Randy Myers saved ten of those W's, and Benitez slammed the door on one other. Rhodes, of course, is still pitching with the Reds, his sixth team since leaving town in 2000. Benitez, as mentioned last week, is delaying the inevitable by playing out the string with the Newark Bears of the Atlantic League at age 37. Moose retired two years ago with 270 career wins. Scott Erickson sputtered to the finish with nine forgettable games as a Yankee in 2006. The other eight pitchers have all been retired for a decade, save for the ageless Orosco, who hung 'em up in 2003.
If you're curious, the Orioles last posted a winning September in 2004, when they were 18-10. But they've only managed that feat twice in the 13-year-skid, with a 20-8 mark in 1999 being the other. So to crack .500 next month would be monumental as well - even more so, if you consider that all but four games come against the quadruple beasts of the American League East. Make it happen, Buck and Co.
Posted by Kevin at 11:16 PM

It feels nice to have a winning month. Especially towards the end of the season.

Ryan - Just about the only thing I remember about August 1997 is that I didn't have to work. On the whole, that's not enough for me to wish I was still 15, though.