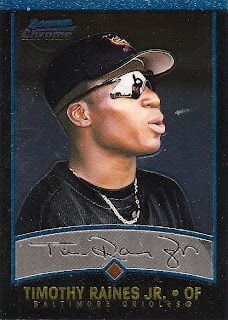 Today I was researching Orioles home runs, and I uncovered something interesting...to me, anyway. In 174 plate appearances in 75 major league games spanning three seasons, Tim Raines, Jr. never hit a home run for the O's. His father made just a dozen trips to the plate for the Birds in four games in 2001, his penultimate season, and went deep once. Tim Junior was schooled by his 41-year-old Dad!
So why was I preoccupied with round-trippers? I put together another Sporcle quiz, this one asking the taker to list the top 200 players on the Orioles' all-time home run list. Why 200? Because that's the largest number of questions that Sporcle accommodates. Again, why 200? It seems excessive, considering that it encompasses every Oriole with as many as five homers, and even a few with four (there was a 20-way tie, but only three spots left to 200, so I took the three who used the fewest at-bats to get there). I've taken several home run list quizzes that were created for other teams, and had a great time seeing how many players I could pluck from my brain in the 20 minutes allotted. I just figured that the Birds should be represented too. So feel free to kill some time and exercise some brain cells by taking my quiz (and rating it)! I'll even give you a hint: you can enter last names only and kill multiple birds with one stone. Typing "Smith" might hypothetically get you four points. Wink, wink. Good luck!
Posted by Kevin at 11:06 PM

57. Ugh, that was awful. I think I'd do better if it was a quiz about Orioles pitchers.

Night owl - There's also a Dodgers quiz. I think I got barely half of them.

I just took your quiz, and it was balls hard. I got 60/200. My proudest pull: Chris Richard. My most shameful miss: Harold Baines.

Got a 92. Worst miss: Jim Gentile. How could I whiff on fricking Jim Gentile? I wasted some time on typing Albert Belle. I must have already entered him because the system wouldn't count it.

I would have bet a lot on Jim Palmer being on the list.

i hate you, i cant spell lenn sakata properly at 6 in the morning.

In fact I was embarrassed by all the names I missed (including Jim Gentile). My most embarrasing miss was Brian Roberts! My proudest pull - Mike Cuellar. Toughest spell - Etchebarren.

Oh, and Commish - I entered Jim Palmer's name at least 3 or 4 times, I was so sure that the quiz was just plain wrong.


What was most interesting though, was his 3 games as a "hitter" in 1980, in which he had 0 PAs. I wondered if he was used as a pinch-runner, but when I looked those games up, he was actually listed as the starting DH (for 3 different games), and was then pinch hit for prior to his first at bat! Anyone know why Earl would do that??

Earl would list a pitcher as his dh on the off chance that the O's would knockout the opponents starter prior to the DH slot. He wanted to avoid putting in a righty dh, for example, against a lefty starter and have that starter lifted early for a righty reliever, therefore losing his lefty/righty 'edge'. If the starter was still in the game when the dh slot came up he'd just 'pinch hit' his scheduled dh.

Not sure I explained that very well. LOL

They passed some sort of rule to prevent that little trick. I think (and I'm just guessing here) the rule was made that the starting listed dh must bat once.

I've been told that Dick Williams invented the 'pitcher for dh' trick but I'm crediting Earl. He's the greatest!!

Tim - Jim Gentile is elusive, it seems! I think Bob (Commish) nailed the explanation of Palmer as DH. If you check the rest of the roster, Earl did it with other starters as well.