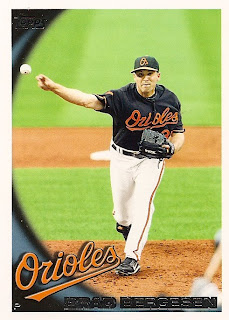 The Brad Bergesen of 2009 has re-emerged of late, and it's about time. After emerging in his rookie season as the most consistently effective Orioles pitcher, his sophomore campaign seemed doomed from the beginning. A freakish shoulder injury incurred during a winter commercial shoot delayed his spring training, and from his first start he seemed hittable. His sinker wasn't sinking, his defense wasn't giving him as much support as it had before, and innings were unraveling in a hurry. You could see in his body language that he was having a confidence crisis, and being shunted to AAA Norfolk twice (and to the bullpen once) didn't do anything to help. After finishing at least six innings in each of his last dozen starts last year, he failed to complete even five innings in five of his first 11 starts in 2010. He took yet another pounding on July 26 in Toronto, giving up a career-high eight runs in five innings to leave his ERA at an unsightly 6.95 and his won-lost record at an ugly 3-9.
But Bergy showed signs of recovery his next time out, holding Kansas City to two runs in seven innings and missing out on a win when David Hernandez blew the save. Last Friday he was even better, yielding only a solo home run to Chicago's Gordon Beckham and leaving after seven innings in a tie game. Still, he couldn't snap that personal seven-game losing streak.
Tonight, Brad took matters into his own hands. With his offense again scuffling (the Birds pushed across only three runs on 13 hits), the young righthander breezed right through the Cleveland Indians, surrendering a single run on two hits, two walks, and a hit batter. He held the Tribe hitless until the fifth inning, when Luis Valbuena singled with two outs to bring home Shelley Duncan (who had walked earlier). All he did after that was set down the next 12 batters in order, including three straight strikeouts at the end of the string. Asdrubal Cabrera singled with two outs in the ninth to bring Shin-Soo Choo to the plate as the tying run, but Bergesen induced a fly ball to Adam Jones to earn the win and wrap up his second career complete game. It took him just 102 pitches, and he logged several innings of ten pitches or less. In his last three starts, he's lowered his earned run average by more than a full run.
Let's keep the good vibes going, okay Brad?
Posted by Kevin at 10:51 PM

Can there be a celebration for being a half game above the Pirates? WE'RE NOT THE WORST!