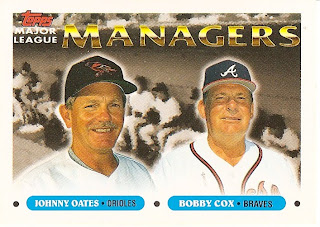 Today Buck Showalter was officially introduced as the 17th manager in Orioles history. While I think his no-nonsense approach and predilection toward younger players is exactly what the team needs, none of us has any way of knowing whether this will work out. The team could be a winner in 2011, or 2012, or 2013…or God forbid, they could just keep losing. But before Buck has even managed his first game in the home dugout at Camden Yards, he has made one gesture that should endear him to Baltimore fans.

Throughout his managerial career, Showalter has worn uniform number 11. Coincidentally, that’s the same number that had been worn by former third base coach and interim manager Juan Samuel, the man Buck is replacing. Perhaps knowing that Samuel was popular in the O’s clubhouse, or maybe just looking for a fresh start, the new skipper decided that he’d like to wear #26. That was the number worn by Johnny Oates during his managerial stints in Baltimore and Texas; after a brain tumor cut his life tragically short in 2004, the Rangers retired the number in his honor. Oates managed Showalter during the latter’s time as a minor leaguer in the Yankees organization in the early 1980s, and the pair became good friends. Even though they managed competing teams in the American League East in the early 1990s, they didn’t let the rivalry affect their personal relationship. While it was classy and understandable for Buck to request his fallen friend’s jersey number with the Orioles, he took the gesture a step further by first calling Johnny’s widow Gloria to ask her permission to do so. After getting an enthusiastic response from the rest of the Oates family, she called Showalter back and gave him the approval he sought.

Good move, Buck. May it be the first of many you make in this town.
Posted by Kevin at 11:15 PM

I haven't watched an O's game on TV in a couple weeks. But I'll be watching the game tonight just to see Buck's first game as an Oriole, see if he does anything differently. I'm curious to see his lineup and how he handles the pen. Hopefully with Guthrie on the mound and pitching the way he has lately Buck won't have many crucial decisions to make out there on the mound.

I never particularly liked Buck when he was with the Yankees, even before the 1995 playoff debacle. One awesome moment though was when he got in a fight with Tony LaRussa behind home plate at Yankee Stadium.

If history is any guide, I can predict how Buck will do as O's manager:
The team will do well in the next couple years. There will be a swirl of excitement during spring training next year, but the chatter in the stands will be that 2012 is the year they contend. That year will come and go without a playoff game reaching Baltimore. Then they'll start saying 2013 is a given. Then it won't happen. They'll get rid of Buck after 2013, then they'll make the playoffs in 2014 under new management.
It happened to the Yankees (got rid of him in '95, championship in '96), Diamondbacks (got rid of him in '00, championship in '01), and, to a lesser extent, the Rangers (got rid of him in '08, serious division contenders in '09, probably division winners in '10).

FTB - Yeah, it was a pretty easy first night for Buck. I loved his "I don't care about the save rule, I prefer the win rule" quote though.

Bo - Who wouldn't like to take a swing at LaRussa?

William - It seems like a long time to wait. But heck, it's been 13 years already. What's another four?