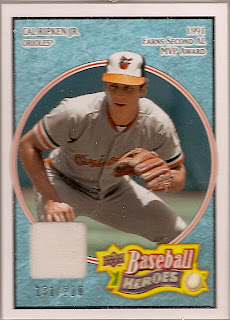 Sorry about the blurry scan, but I was too impatient to free this card from its screw-down case.
I'm sure I'm the last to tell you, but today is Cal Ripken, Jr.'s 50th birthday. Last week, I made note of Boog Powell's birthday by mentioning the two home runs he'd hit on his special day. Well, Cal only homered on his birthday once: August 24, 1983, a Wednesday game in Baltimore. You've probably heard about this game. With the Birds down 3-1 to the Blue Jays in the ninth, Joe Altobelli used a couple of pinch hitters to complete a rally. Having emptied his bench, he deployed an unusual defensive alignment in the top of the tenth: outfielders Gary Roenicke and John Lowenstein played third base and second base, respectively, and diminutive infielder Lenn Sakata became the new catcher. After Tim Stoddard gave up a Cliff Johnson home run and a Barry Bonnell single, Tippy Martinez was brought in to relieve him. That's where the story gets really crazy.
Bonnell, undoubtedly eager to run on Sakata (who hadn't caught since Little League), was picked off by Martinez. Tippy walked the next hitter, Dave Collins, and promptly picked him off as well! With two outs, Willie Upshaw hit a bouncer up the middle that Brother Lo put a glove on, but he had no play at first. Base hit. As Buck Martinez came to bat to try to pad the Jays' lead, Tippy...you guessed it, picked off Upshaw! Toronto manager Bobby Cox blew a gasket, arguing in vain that the O's lefty must have been balking. The umpires didn't see it that way, and the Blue Jay runners' aggressiveness cost them. But they still had the lead heading to the bottom of the tenth.
Cal was the first batter, and he deposited a Joey McLaughlin pitch over the Memorial Stadium wall for a game-tying homer - Happy 23rd Birthday, Cal. Eddie Murray walked, Lowenstein advanced him to second with a grounder, and John Shelby was intentionally walked to set up a double play. Instead, Roenicke struck out, leaving it up to Mr. Sakata and his .616 career OPS. Lenn hit the biggest of his 25 career home runs, a three-run walkoff shot that sparked an eight-game winning streak. In the process, the O's took control of the American League East. They won the division, the pennant, and the World Series. Cal won the first of his two MVP awards and caught the final out in the Fall Classic. I have a feeling that he didn't mind being upstaged on his birthday, either.
P. S.: Read one fan's excellent remembrances of listening to the game on the radio at the blog Swing and a Miss.
Posted by Kevin at 10:58 PM