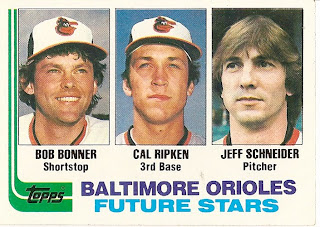 This is one of the more iconic cards in my collection, although when it comes to monetary value it's a far cry from the 1982 Topps Traded card that features Cal Ripken, Jr. all by his lonesome. I don't yet have the latter, and I don't think I've even seen it in physical form. I'm sure a few copies of it will be on display tomorrow at Baltimore's Convention Center, where I will be attending the official first day of the National Sports Collectors Convention. I had some idea that this show was a big deal, based on this article written by Bill Simmons a year ago. I became aware several months ago that this Big Deal was coming to my hometown, as fellow card bloggers were emailing back and forth trying to nail down plans for the weekend. As happenstance would have it, tomorrow is my birthday...I may have mentioned that once or twice in the past week. This is like the perfect storm for a cardboard-loving nerdlinger like myself.
Needless to say, I'm giving myself a bit more leeway than I usually do when it comes to the ol' cardboard budget. I'm also taking off of work a few hours early to maximize my browsing time, though I've been forewarned by those in the know that mere hours probably won't be enough to get my fill. On the contrary, a shortened agenda may be all that keeps me from bankruptcy. I'll report back in a few days with my haul.
Posted by Kevin at 10:33 PM

Don't go too deeply into debt.

I paid $12.75 for my 82 Topps Traded Cal card in the late 80s. My parents didn't want me to buy it and tried to talk me out of it. I guess that seemed like a lot to spend on just one card. I keep meaning to get it graded one of these days. Graded high, as I'm sure mine would be, it was a good investment. And yes, I remind them of this from time to time.

The regular 82 Topps Ripken RC seems to be fairly worthless today, I bought an ungraded one off of ebay a couple years ago for like $5 because I wanted an upgrade over the one I had as a kid. It was a little worn since I'd handled it a little too much as a young collector. The one I got off of ebay is in perfect condition to my eyes, totally worth it for just a few bucks.

Kevin, what are your most wanted Orioles cards? I've always wanted the Brooks RC, and have come close to going for it. I just haven't taken the plunge yet. I check ebay from time to time to see if I can get it at a relatively low price. Another one is the Cal Rochester card. I've seen that thing so many times in card stores, always always wanted that.

night owl - I'll do my best. I can always sell a kidney on the black market. I only need the one.

FTB - That was quite the savvy purchase! The Traded Ripken and the Brooks rookie are definitely two of my most-wanted. There are other, much more attainable cards that I want, naturally. 2002 Fleer Tradition has a short-printed Tim Raines, Sr. card that I believe is the only card showing him as an Oriole.