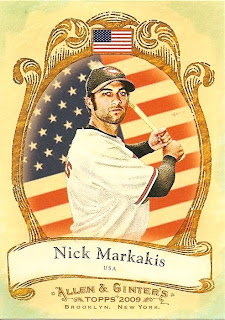 This is the sort of card that benefits from an artist's touch. But sometimes a third party comes along and adds their own finishing touch to a card that's less-than-welcome.
In general, I avoid comment threads on online articles because they devolve into shouting, posturing, name-calling, and every other brand of ugliness that the anonymity and wide audience of the Internet encourages. But the commenters on sportswriter Joe Posnanski's blog are the refreshing exception that proves the rule. Joe calls them "Brilliant Readers", and he's not being sarcastic. I'm always entertained and enlightened when I move on from his great feature articles to the supplemental remarks provided by his other readers. Over the weekend Poz ranked the current major league managers based on their playing careers, and the mention of Buck Showalter (who never made the majors but did hit .324 with 82 RBI in 1980 for the Yankees' AA Nashville squad) elicited a great anecdote from reader "sansho1". I excerpt it in full below:
"In 1981 I (age 13) was waiting for a flight in the Birmingham airport, absently flipping through the baseball cards I’d brought along to alleviate boredom, when an older gentleman saw what I was doing and asked to see my best Yankee card. I didn’t know what he wanted with it, so after some deliberation I settled on a 1974 Roy White and handed it to him.

He told me his son played in the Yankees farm system and had just been promoted to AAA. Said he was a first baseman and a .300 hitter, and he figured to be in the major leagues probably the following year. Then he took out a pen, scrawled something on the card, and handed it back to me, saying, “Hold on to that card, it’s going to be worth something one day!”

As he walked away, I looked at the card. In the white border along the bottom was etched “Nat Showalter’s Father”. Nat, it turns out, was William Nathaniel “Buck” Showalter.

I was perplexed, and a little pissed, that the guy thought he’d actually ADDED value to my 1974 Roy White by writing on it. But when I think about it now, I think about a guy bursting with such pride at his son’s accomplishments that he’d walk around airports autographing his kid’s name on strangers’ paraphernalia, and how great it must have been for those few months when the sky was the limit for the son he’d raised, and I forgive him."

I think the storyteller has the right idea. In hindsight, he probably realizes that it's pretty cool that he met Buck's father. Even if the guy overstepped his bounds by defacing a 1974 card (and let there be no doubt, he overstepped), he was just a proud father who got carried away. Besides, he did end up making it in the majors...it just took him a little longer than expected. But when he got there, he won 898 games and counting. As good a player as Roy White was, that kid was never going to put his future kids through college with that card anyway.

Rico Petrocelli's brother was an usher at Yankee Stadium. He was kind of goofy and would insist on 'autographing' our programs. We never minded because he'd always find me and my friends nice seats in his section behind the 3rd base dugout.

Nat? Buck? didn't anyone think to call him billy?

Bob - Did he autograph them as "Rico Petrocelli's brother" or did he divulge his full name?

Max - Maybe there was another Billy in the family. Who knows?