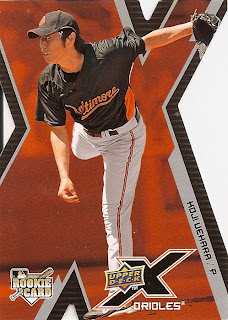 I'm way past due in giving the pitchers some love on this blog, and no one is more deserving than Koji Uehara. For the first year and a half of his two-year, $10 million contract, he looked like just another free agent bust for the Orioles. He was as fragile as a Faberge egg, wilting in the heat and humidity and landing on the disabled list multiple times. He missed a chunk of June and all of the second half of the 2009 season, at which point the club decided to minimize their losses and drop him from the rotation. It was a logical move, as he'd spent his last two years in Japan as a closer with some success. His stamina problems would be less of a factor in one-to-two inning bursts, and his excellent control would be a panacea after the heave-and-a-prayer stylings of the Dennis Sarfates and George Sherrills of the world. It was a great idea in theory...but then Uehara tweaked his hamstring once more in spring training and wasn't seen again until May. He pitched effectively in six games, but then went back on the DL with a strained forearm. He returned 40 days later and seemed out of sync, allowing runs in three out of four appearances.
But then something clicked. In his last fourteen games, Koji has given up just one run in 17 innings for an 0.53 ERA. He's allowed 13 hits and only two walks while striking out 19. He has three holds, picked up a win in the wild 11-10 comeback victory against the Rays, and earned his first major league save in Saturday's 8-6 win over Texas. For the season, his ERA has dropped to 1.73 and his strikeout-to-walk ratio is an excellent 5.80-to-1. Oh yeah, and he's rocking an amazing set of sideburns. 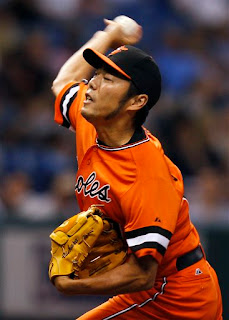 It would be great to see Koji back in the Baltimore bullpen in 2011. We just have to make sure he eats his spinach and does his yoga.
Posted by Kevin at 8:24 PM

Team Phungo was at the first Uehara save. Great game for Josh Bell too.

It is mostly Rangers related, but I have a few O's notes.