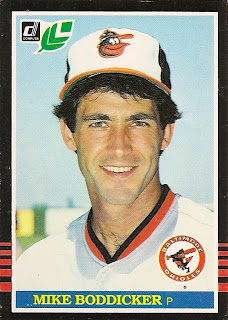 For the past two nights, I had the pleasure of listening to Mike Boddicker add his insights and humor to the Orioles' broadcasts. Tuesday night he was the third man in WBAL's radio booth, and last night (and tonight) he had the same role on MASN's TV coverage. I hadn't watched/listened to any other games that he'd covered this season, but now that I have I think he's the best of the guest analysts in 2010. He sounds comfortable and articulate, as if he'd been at it for years. He's knowledgeable about the O's and their opponents, and he might just be clairvoyant. At the start of the fourth inning on Tuesday, the Birds were trailing 1-0 and Cleveland starter Justin Masterson had set down nine batters in a row. Boddicker noted that Masterson had the talent to get batters out, but that he has a tendency to come unraveled quickly. As if on cue, the Orioles touched him up for four runs on their way to a 14-8 laugher.
In last night's game, Boddicker was reunited with former teammate Mike Flanagan. The pair were mainstays in the Baltimore rotation from 1983-1987, and they had an easy and collegial chemistry in the booth. They swapped anecdotes, jokes, and good-natured insults as Brad Bergesen breezed through a complete-game victory. Late in the game, as Bergy was polishing off another quick inning, Boddicker observed that the game was much less tense than you would expect, given a two-run margin between the teams. Flanagan astutely added that it was as though Bergesen had put the Indians in a sleeper hold.
So if you're in the MASN viewing area tonight and you're not sufficiently football-mad to watch an exhibition game, check out Mike Boddicker's work. I don't think you'll be disappointed.
Posted by Kevin at 8:26 PM