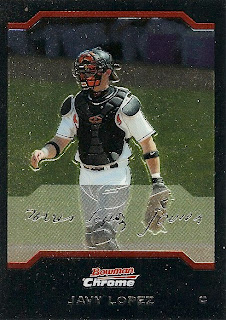 The Hall of Fame ballots for 2012 have been released, and this looks like the last breath of fresh air before things get really messy. All of the first-time candidates are mega-long shots for Cooperstown, and that includes Javy Lopez and his .287/.337/.491 line, 260 home runs, and 864 RBI. Ol' Jav didn't have the longevity, having played for 13 full seasons, and he was never much of a defender. The only newbie who projects to get any support is Bernie Williams, and that's only because of the rings he has at home. If I were a betting man, I'd put my money on Barry Larkin getting into the Hall this year, but probably not anyone else. I wish I could have faith in the voters to give a thumbs-up to Jeff Bagwell, Tim Raines, and maybe even Alan Trammell, but I know better. I don't hold out any hope for Mark McGwire and Rafael Palmeiro, because there are a lot of writers still on their high horses. That means that next year is going to be a real headache. Take a look at the list of players who retired in 2007 and will be eligible in a year's time: Craig Biggio, Barry Bonds, Roger Clemens, Mike Piazza, Curt Schilling, and Sammy Sosa. That's not even getting into interesting names like Julio Franco and Kenny Lofton. I already feel a headache coming.
Posted by Kevin at 9:13 PM

I agree with your assesment of the Ballot this year. I think that Larkin gets in this year. I think Jack Morris, Lee Smith, Jeff Bagwell, Tim Raines, and Edgar Martinez get boosts in voting but probably fall short. Bernie Williams and Javy are probably the only newcomers to warrant a second look though.