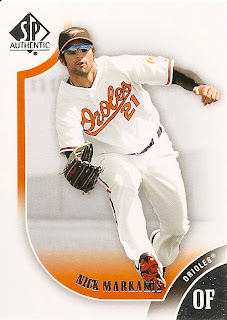 If you're already as starved for baseball as I am, maybe you watched Jeremy Guthrie pitch three shutout innings last night in the MLB All-Stars' rain-shortened 7-0 win over a team of Taiwanese stars. After that was over, maybe you even flipped over to ESPN2 to watch the unveiling of the 2011 Gold Glove Awards. If so, you know that catcher Matt Wieters and right fielder Nick Markakis each won their first Gold Glove. Former Orioles center fielder and eight-time Gold Glover Paul Blair was even in the studio to announce the American League outfielders that received the hardware, which was a neat moment. Obviously, the O's haven't received a ton of laurels in recent years; the last time they had multiple Gold Glovers was 1998, and the honorees were the long-gone trio of Mike Mussina, Rafael Palmeiro, and Roberto Alomar.

The great news is that not only did Wieters and Markakis win, but they were deserving. In particular, it's been a pleasure to watch Matt develop into an elite defensive backstop in just three years. After enduring the creaky Javy Lopez and the sluggardly Ramon Hernandez, it's nice to have a lean, mean 6'5" badass to gun down baserunners, smother wayward pitches, and form an impenetrable wall against homeward bound opponents. As for Markakis, the advanced defensive metrics aren't sold on him, but it seems to me that he's memorized every nook and cranny of the right field territory in Camden Yards, and there's no denying his expertise when it comes to punishing runners who are foolish enough to try for an extra base. He's gotten lost in the shuffle playing for some bad teams, and it's nice to see him get a bit of attention.
Posted by Kevin at 4:57 PM

Nick plays a tough Camden Yards right field flawlessly. I could watch Matt shrug off Upton over an over and over at 2:10 all day long: http://www.youtube.com/watch?v=Yb9Ykr5y4rg

It was nice to see the Orioles showing up in some positive post-season news!

I have felt that Nick was deserving of a GG 1 or 2 times over the past few years, so it was nice to see that he finally broke through and received the overdue recognition.

Matt was a pleasant surprise, but completely deserving. I was just shocked to see him get the recognition so quickly despite playing on a losing team.

This also gives a little hope that the team is moving in the right direction. If we get the pitching to gel a bit, we might actually have something.