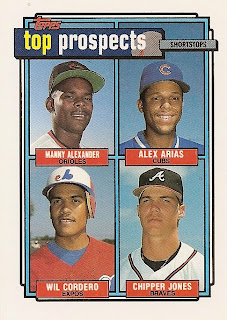 It's true, I finally got the White Whale of my 1992 Topps Oriole team set. It was one of about 40 cards sent to me by fellow O's fan Paul last week. Just yesterday, Ed spotted some of my other set needs at a card show and picked them up on the cheap. After the dust settled, I consulted my want list, and I now need one stinking card. The last man standing is Ryne Sandberg, who occupies card number 110. So if anyone has ol' Ryno hanging around and just taking up space, I'd be glad to take him off of your hands. Shoot me an email.

Meanwhile, how cool is it that Chipper Jones is still playing? (Not very cool, if you're a Mets fan. Otherwise, it's quite nifty.) This isn't even his first Topps card. He had a draft pick card in the 1991 set, since the Braves chose him first overall out of high school in June 1990. I was in the second grade in 1990, so I'm grateful to guys like Chipper for sticking around in the major leagues to make me feel a little less old.
Posted by Kevin at 9:21 PM