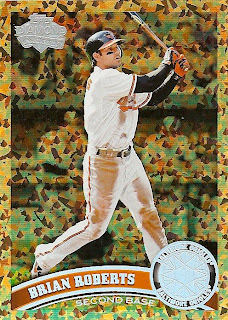 It seems like it's been forever since I featured a recent addition to my unofficial Brian Roberts collection. It's hard to find the enthusiasm to talk about my favorite player when faced with the grim reality that he is now 34 years old and has missed 226 games over the past two seasons. But this shiny (you'll have to take my word for it) cognac parallel is too good to ignore. I like it even more because the baseball blog cognoscenti have dubbed these cards as "liquorfractors". Hey, Topps, if you don't want to get tweaked, you probably shouldn't name your inserts after booze. Anyway, this was the incoming half of my contribution to Thorzul's fifth annual Trade Me Anything! series. Looking to take full advantage of the "anything" concept, I sent Milwaukee's favorite teacher/blogger a couple of duplicate Brewers stickers (Rickie Weeks and Corey Hart) and a homemade mix CD featuring classic rock hits from 1970, the year the Brew Crew debuted in the major leagues. If the video he posted on Thursday was any indication, my musical choices were wise. As for Brian, there might be hope yet. After all, Sidney Crosby just had a successful return to the ice for the Penguins after sitting out since January with concussion symptoms. If Roberts were subjected to a similar timetable, he'd be ready for action by Opening Day.
Posted by Kevin at 10:41 PM