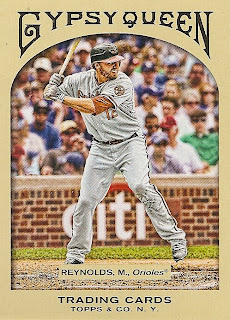 Hey, an Oriole is the best at something! As reported by Lewie Pollis at Beyond the Boxscore, Mark Reynolds had the highest power factor in the major leagues in 2011. Great! So what's power factor? It's just extra bases per hit: subtract the player's hits from his total bases and divide the result by his hits. It's a slightly more reliable measure than slugging percentage, in that it doesn't penalize sluggers who make less contact overall. As Pollis points out, somebody who went 1-for-4 with a home run would have the same slugging percentage as a player who went 4-for-4 with all singles. Reynolds, who had 27 doubles, a triple, and 37 home runs, totaled 65 extra-base hits of his 118 total hits. That's 258 total bases on 118 hits, giving him a power factor of 1.186. That's pretty far ahead of runner-up Curtis Granderson and his PF of 1.105, and nearly double the league median of .621. O's shortstop J.J. Hardy also cracked the top 25, slipping in at 23rd with a PF of .824. Of course their infield-mate Robert Andino had the ninth-worst number in baseball at .308, but who's counting?
Posted by Kevin at 9:38 PM