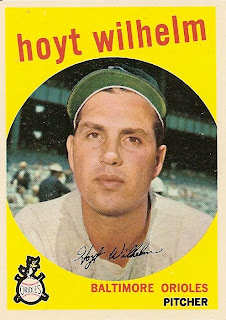 Today is the 49th birthday of former Oriole Jamie Moyer. After missing the 2011 season with Tommy John surgery, the veteran of 24 big league seasons intends to pitch again in 2012, and has already worked out for scouts from several teams. Nothing would make me happier than to see someone 20 years older than me on a major league roster next year. In honor of Jamie Moyer, here is a brief history of players who suited up for the Orioles in their forties.

1957: Dizzy Trout makes a brief comeback, pitching twice in relief for the O's at age 42, his first big league action since 1952.

1962: Knuckleballer Hoyt Wilhelm turns 40 on July 26. In his final season in Baltimore, he goes 7-10 and leads the club with a 1.94 ERA and 15 saves. Traded to the White Sox the following winter, he sticks around for another decade and sets a record with 1,070 games pitched.

1970: Reliever Dick Hall earns a win with three spotless innings on his 40th birthday, September 27. It runs his record to 10-5 for the year with 3 saves and a 3.08 ERA. He adds seven scoreless frames during the postseason, helping the Birds to their second World Series win in five years.

1992: Mike Flanagan had a memorable 1991 season, returning to the O's as an effective reliever and finishing the last game at Memorial Stadium. Camden Yards didn't treat him as well. At age 40, Flanny allowed 31 earned runs in 34.2 innings for an 8.05 ERA. Rick Dempsey made a surprise curtain call at age 42, appearing in 7 games in June and July and one more in September when the team was short-handed behind the plate. He had a hit and a pair of walks in 11 plate appearances.

1996: In another homecoming, the Orioles reacquire 40-year-old Eddie Murray in a midsummer trade with the Indians. He hits 10 home runs, including the 500th of his career, to help the team capture the A.L. Wild Card. The Birds bow out in the ALCS despite a .333/.429/.467 postseason batting performance by Eddie.

Unsurprisingly, the O's haven't suited up a quadragenarian in the past five seasons, as they make a more concerted youth effort. I wouldn't expect them to break that streak this year, as much fun as it is to imagine Jamie Moyer rejoining the Birds 16 years after they last parted ways.
Posted by Kevin at 8:16 PM

Very interesting man. Never seen a write-up like this before.