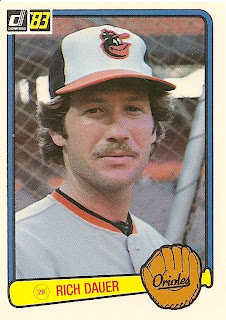 After months upon months of speculation, or maybe two and a half weeks, the Orioles finally revealed the full details of their uniform tweaks for the 2012 season. Check it all out at Roch Kubatko's blog, and then you come right back hear so I can tell you what I think about the new duds.

Welcome back! First, I'll get the piddling dislikes out of the way. I've never been a fan of the white-panel hats. They're just not my style, and I think they pale in comparison to the solid black look. I also still don't like the "O's" hats, but I don't feel as strongly about them as did when they first appeared last decade. That's just as well, since they don't seem to be going anywhere any time soon.

I'm indifferent to the Camden Yards 20th anniversary patch. It's not very exciting to look at, but it's not a Citi Field-esque catastrophe either. The brick pattern in the background is a nice enough touch, but the black box around the orange-and-white Oriole Park at Camden Yards text looks a bit off to me. The color I most associate with the ballpark is green. Did they think it would clash too much? Eh.

A minor thumbs up to the slightly tweaked "Baltimore" script on the road jerseys. The old tapered wordmark didn't bother me too much, but the new uniformly-sized letters do look cleaner. The orange Saturday special jerseys are right in my wheelhouse. Orange is my favorite color, and it'll be nice to see it back in the rotation for the first time since 1992. It's loud without being an eyesore in my opinion. Lastly, a big thumbs up to the new-old Oriole bird. I know it's a fierce topic of debate in Baltimore, but the stodgy ornithologically-correct bird had a couple of decades to do his thing, and it's time to have a little fun with a familiar smiling face. As I mentioned previously, it looks especially great on the black and orange road caps. And although I don't much care for the "O's" cap logo, it's a solid addition to the bird's cap. It's at least an improvement over the indiscriminate blob of color on the cap of the bird's 1960s-1980s predecessors.

Of course, as many other Orioles fans have suggested amid the buzz of the new uniforms, these threads will look a lot better if the guys wearing them are able to win 15 or 20 more games.
Posted by Kevin at 10:56 PM

I think we agree on most of the points you hit on.
We both
- Don't like the white panel
- Like the orange jerseys
- Like the black paneled road hat
- Dislike the "O's" hat
- Are indifferent to the 20th anniversary patch (it'll only be around 1 season anyways)
- agree that the cartoon bird wearing the "O's" hat is an improvement over the past designs
-Winning 15 or 20 more games would make the team overall look better.

I like that the cartoon bird wears the O's hat as part of the logo, but I hate that the players wear it during games. I'd rather it be a batting practice only hat or something.

They should wear the non-white panel cartoon bird hat with the black jerseys. Or, retain the ornithologically correct bird hat as the alternate.

Overall though, I like the new caps and I especially love how they are using both the 60s version and 70s/80s version.