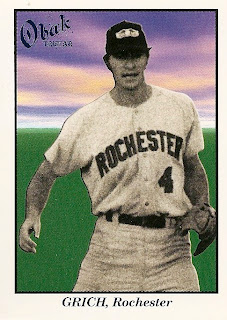 For today's regular installment of OCOTD, we have an unconventional card depicting a young Bobby Grich in the threads of the AAA Rochester Red Wings. It's so odd to see him without his classic mustache, which weighs in at 1.5 Sellecks. The photo would have been taken in 1970 or 1971, the infielder's age 21 and 22 seasons. In the former season, he played only 63 games at Rochester due to a big-league promotion in late June. But in that half-season with the Red Wings, Grich hit .383/.503/.570 with 9 homers and 42 RBI. He spent nearly all of 1971 at Rochester, batting .336/.439/.632 with 32 home runs, 83 RBI and 124 runs scored. He topped the International League in runs and homers, as well as slugging percentage and OPS. His 299 total bases were 29 more than runner-up Leroy Stanton. Unsurprisingly, he never played another game in the minor leagues after that monster season.
Posted by Kevin at 9:43 PM