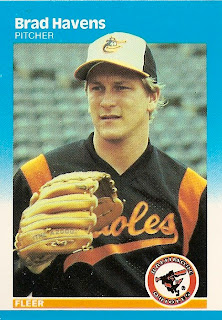 During baseball season, I often take for granted the daily glut of Orioles news. Whenever I need a quick idea for a blog entry, I can turn to the day's game results, or discuss the recent performance of a player (good or bad), or even take a look back at memorable O's occurrences on that particular date in team history. But more often that not, there's just nothing going on in the winter months. There's only so much hot stove rumor-mongering to be done, especially when the hometown team doesn't seem likely to be throwing around free-agent dollars. What's a workaday blogger to do? Stare off into the distance in an empty stadium like Brad Havens, waiting for a long toss that won't come for five more months?
Tonight, I'll fill the void by telling you what I plan to do in these long and lonely months until April 6.
I've already turned my rooting energies toward the Ravens. Thought they haven't won the Super Bowl since 2001, I certainly haven't taken their regular-season and early-round playoff success for granted. Baltimore's football organization is as professional and competent as its baseball team once was. With Sunday's heart-stopping win in Pittsburgh securing a season sweep of the hated Steelers, I'm optimistic that the Ravens will have another strong chance at the Lombardi Trophy.
I'll be getting my money's worth out of Netflix. I finally broke down and subscribed to their wireless streaming service earlier this fall, and it's given me a chance to see plenty of movies I should have gotten to sooner - everything from Shutter Island to Being John Malkovich. I've got a few dozen more waiting in my Instant Queue, and that's before I get to their selection of TV shows. I don't have the patience to follow many television series, especially when it comes to playing catchup on top-rated shows that I didn't latch on to at the beginning. I've nearly finished with Arrested Development, and it's bittersweet knowing that I only have three new-to-me episodes left. Next I'll probably take on Mad Men, to see what all the fuss is about. If you've got other recommendations, drop 'em in the comments.
Maybe I'll do some long-overdue home improvements. Finally get around to hanging pictures in the bedrooms, finishing up the last of the trim work...all that stuff that I put off indefinitely once I finally moved into my house last year. I was hoping that if I waited long enough, the cats might chip in and do their share...I guess I adopted a couple of freeloaders though.
For the next few months, the holiday hub-bub will keep me busy as well. I'm already giddy for a rare Friday off for Veteran's Day, and I'll be celebrating with either a shopping trip to Lancaster or a visit with friends a bit farther north in Philadelphia. Maybe both, depending on how things unfold. Thanksgiving as usual at my aunt and uncle's up in the sticks of Harford County, probably followed by a  journey to M & T Bank Stadium that night to root on the Ravens with my sister. As for Christmas...I may have mentioned before that I am a Yuletide sap. So that'll keep me going throughout December. By the time New Year's Day gets here, it'll be mere weeks until pitchers and catchers report!
Oh, and I shouldn't need to tell you that I'll still find time for buying, trading, cataloging, and organizing baseball cards. There is no offseason for that.
Posted by Kevin at 9:55 PM

Kevin, Do you realize that Monday (11/7) marked the 4th anniversary of you starting The Great 1965 Topps Project? With only a "dirty dozen" to go, maybe you can use the Fall/Winter for hunting them down. A challenge for you - don't reach the 5th anniversary!!

I just finished watching Party Down on Netflix and was quite entertained by its' two seasons.