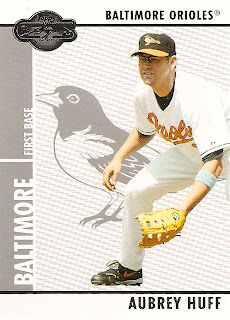 I took a look at the final vote totals for the American League MVP. Congratulations to Justin Verlander, who I've had the pleasure and the pain of watching in person as he made my Orioles look foolish. But as I peered down-ballot, I saw no pity votes for any Baltimore players. Matt Wieters didn't get tossed a tenth-place vote for his otherworldly defense and improving offense. No one scribbled in Kevin Gregg in eighth place on a drunken dare. I don't really think the O's deserved any love in the MVP discussion, but when David Freaking Robertson gets named on an MVP ballot AND a Cy Young ballot, you've got proof that some BBWAA members are strange creatures.

Really, the lack of Orioles in the MVP race is just another signpost of how far off-track the club has been recently. Aubrey Huff's fluke 2008 season earned him a 16th-place finish in that year's MVP vote, making him the only Oriole in the last five years to be so honored. Miguel Tejada's fifth-place finish in 2004 was the last time the Birds had a serious candidate, and even then he received no first-place votes. The last time any voting member of the BBWAA considered an Oriole to be the most valuable American Leaguer, it was 1991; 15 of them boosted Cal Ripken, Jr. to the top of the heap. I'd check and see how long it's been since a Baltimore pitcher was included on a Cy Young ballot, but I'd like to finish writing this post some time before Thanksgiving. Team success will breed more individual recognition, and I can't wait for the day when we don't have to drum up pride from obligatory All-Star selections and occasional Gold Gloves or Player of the Week nods. I long for a roster that even casual fans in other cities can identify by name and by face, and not just because they were good for another team a couple of years earlier.
Posted by Kevin at 6:03 PM

My guess was Mike Mussina in 2000, but actually Erik Bedard picked up a single vote in 2007.

It is tougher to get a Cy Young vote since there are fewer voting slots (up until last year, they only voted for 3 places, now they vote for 5 places) as opposed to the 10 places on the MVP ballot.