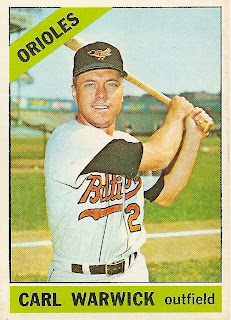 Carl Warwick was an Oriole just long enough to get his face on this card. The six-year major league veteran made his mark with a 3-for-4 pinch hitting performance for the Cardinals in the 1964 World Series, and also hit 17 home runs in 1962 for St. Louis and Houston. In July 1965, the O's acquired him from the Cards but got little production. In 9 games, he was 0-for-14 with 3 walks. The following spring he was traded to the Cubs for backup catcher Vic Roznovsky. Carl spent most of the year in the minors, hitting .227 in 16 games in Chicago. Those were the final big league games of the 29-year-old's career. Considering the context, it's kind of impressive that Topps captured Warwick's fleeting time in orange and black instead of using one of those lame close-up portraits with no hat. It's the small stuff that makes me happy.
Posted by Kevin at 10:47 PM