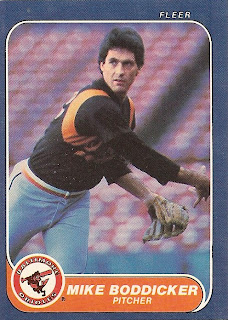 Some bizarre yet encouraging news came out today about former Orioles pitcher and broadcaster Mike Boddicker. The native Kansan was diagnosed with cancer recently, but it was confined to his tonsils. I've never heard of something like that, but a little Internet research tells me that tonsillar cancer affects more than 8,000 Americans per year. It seems that Mike was fortunate to receive his diagnosis early. Three weeks ago, the tonsils were removed. A follow-up biopsy of the lymph nodes came back negative, but he will still undergo localized radiation treatments as a precaution. Roch Kubatko reports that Boddicker is feeling fine and looks forward to a hunting trip this week. I wouldn't be game for that kind of activity even in perfect health, so I hope and think that Mike will be alright.
Posted by Kevin at 10:46 PM

He is from Iowa not Kansas? FREDTERP