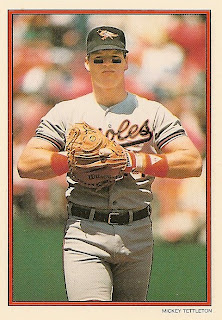 In my aimless television wanderings last night, I came across a MAC Conference college football game between Miami of Ohio and Ohio University. The starting quarterback for the Ohio Bobcats is one Tyler Tettleton, a redshirt sophomore from Norman, OK and the son of Mickey. Tyler passed for 203 yards and 3 touchdowns and also led OU with 126 rushing yards in a 21-14 win. The team finished the regular season 9-3 overall with a 6-2 conference record. They'll face either Northern Illinois or Toledo in the MAC championship game in Detroit on December 2. For the season, Tettleton completed 64% of his passes for 2,868 yards with 26 touchdowns and 7 interceptions. He was also the team's second-leading rusher with 576 yards on the ground, a 4.4 yards-per-attempt average, and a team-high 8 touchdowns. That's a pretty impression effort for a first-year starter. Could Tyler follow his father into professional sports? Let me put it this way: a couple of guys named John Skelton and Richard Bartel played QB for the Arizona Cardinals last Sunday. I wouldn't bet against him.
Posted by Kevin at 8:28 PM

FOR SALE! Card in mint condition. Serious inquiries only pls. email to; selena.calhoun@ymail.com
We have other cards for sale also.