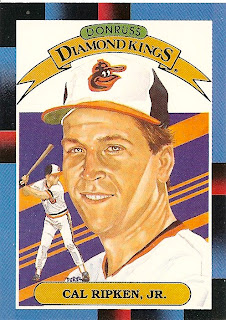 If you're feeling generous, you might classify this card as a work of art. But it pales in comparison to the custom creations of that crafty San Diegan (Diegon?) Travis Peterson, the man behind PunkRockPaint. Travis has been doing his thing on his own blog for the past three years, but he's really outdone himself with his submission to Thorzul's fourth annual Nightmares on Cardboard Contest. He Photoshopped and printed an entire pack of 1986 Fleer/"Fear" cards, complete with ghastly team logo stickers and "Baseball's Famous Frights" fun fact/player cartoon cards. Given my Charm City provinciality, I especially enjoyed the Baltimore Poe Boys logo sticker and the card featuring the Poe Boys' young shortstop, Cal Raven, Jr. You owe it to yourself to check out Travis' masterpieces. I'll just state for the record that I would absolutely pony up several American dollars for a Poe Boys shirt.
Posted by Kevin at 10:08 PM