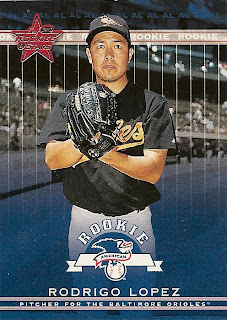 I've been avoiding talking about the infuriating and humiliating circus that was the Orioles' general manager search, because I don't like to type angry. If you put something on the Internet, it has a way of sticking around and cropping back up. So I'll confine my opinions to the man who finally accepted the job over the weekend, former Expos and Red Sox GM Dan Duquette. I'm relieved, honestly. Considering all of the highly qualified candidates who lined up to turn down the job, and the anonymously-quoted executives who clucked about Peter Angelos' heavy-handed tactics, I'm just glad that the O's tabbed someone with a resume as impressive as Duquette's. They could've wound up with an Angelos toady like John Stockstill, or a Dark Ages-bumbler like Ned Colletti; both were linked to the job at various times.

The primary concerns with the new GM (other than the ever-present specter of Angelos' interference) are his reputation as a brusque, impersonal man and the fact that the hasn't been employed by a major league team since 2002. As Camden Chat's Andrew Gibson pointed out in his own take on the hire, that was the year that Rodrigo Lopez was a Rookie of the Year hopeful. It's been awhile. But Duquette built winners in Montreal and Boston and had a knack for savvy trades. He acquired Pedro Martinez for Delino DeShields (while with the Expos) and Carl Pavano and Tony Armas, Jr. (with the Sawx). He turned Heathcliff Slocumb into Derek Lowe and Jason Varitek, a deal you've probably heard about before. While he's not an Andrew Friedman-esque wunderkind, his resume is progressive enough that I'm not overly fearful of any Kevin Gregg-type roster catastrophes.

Oh, and the famous "in the twilight of his career" remark that Duquette made after letting Roger Clemens leave Boston as a free agent in 1996? I can forgive the guy for not predicting that his former ace would pump himself full of steroids in order to return to dominance for another decade.

So welcome to Baltimore, Dan. Do the best you can with whatever authority you're actually given.
Posted by Kevin at 9:15 PM