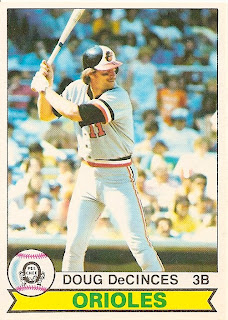 I'm always hesitant to skimp on the commentary on Vintage Fridays, but I spent the day outlet shopping in Lancaster and I can barely keep my eyes open. Since it's 11/11/11, here's a Canadian import featuring one of the best #11's in team history. At the time this card was hitting stores, Doug DeCinces was coming off of a 1978 season that proved to be his best in Baltimore. Despite missing 20 games, the third baseman led the O's with 37 doubles and 28 home runs, as well as a .526 slugging mark (third-best in the American League). He also drove in 80 runs and batted .286. According to Baseball Reference, his total of 6.8 Wins Above Replacement (WAR) made him the fifth-best overall player and third-best offensive player in the A.L. Not bad for somebody who was given the unenviable task of replacing Brooks Robinson at the hot corner.
Posted by Kevin at 9:08 PM