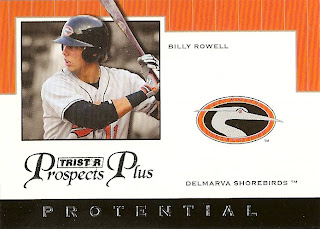 Due to some poor time management, I didn't get yesterday's card posted before I left for a day trip to Chestertown for some Washington College alumni events. So you'll get a rare doubleheader today.

Friday was the deadline for teams to add minor league players to the 40-man roster, thereby protecting them from being claimed in the Rule 5 draft. Unsurprisingly, Billy Rowell was left off of the Orioles' 40-man. There is zero chance that another team grabs the infielder, which tells you all that you need to know about one of the club's biggest draft busts. In 2006, the O's selected Billy out of Bishop Eustace High School in Gloucester, NJ with the ninth overall pick in the first round. Six seasons later, he's played a whopping 41 games at the AA level, hitting .227/.304/.244 at Bowie last year. He's slugged .389 for his minor league career, and it took him three tries at single-A Frederick to crack double digits in home runs. He's even started venting his frustration with the organization, which is a great idea when you're presumably on thin ice already.

If you're playing the Hindsight Game, the two players chosen immediately after Rowell in 2006 were Tim Lincecum and Max Scherzer. Not a great day for the Orioles' personnel department.
Posted by Kevin at 11:55 PM