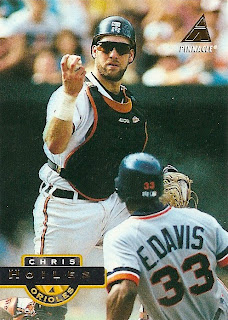 I never really gave it much thought before, but one of my favorite themes in my team collection may be cards picturing Chris Hoiles making a play at the plate. This is the fifth such card I've posted on the blog, and if you don't believe me you can click the "chris hoiles" tag at the foot of this entry. Considering that future Oriole Eric Davis played only 23 games with the Tigers in the 1993 season, we shouldn't have a hard time figuring out when this photo was snapped. The ever-valuable Baseball Reference tells us that E.D. and the Tigers visited Camden Yards for a three-game set spanning September 24-26. In the opener, Eric singled once but was stranded on first base. In the second game...well, we've got something.

It was the first half of a doubleheader on Sunday the 26th, after rained washed things out the day before. Arthur Rhodes got the start for the O's and was hammered, allowing back-to-back home runs to Davis and Alan Trammell in the second inning and a three-run shot to Cecil Fielder in the third to earn an early exit. The Birds chipped the Detroit lead down to 6-3 by the seventh inning, but Mike Oquist and Todd Frohwirth ran into more trouble. Travis Fryman and Fielder chased Oquist with back-to-back hits, and Davis greeted Frohwirth with a walk. After Trammell went down swinging, Mickey Tettleton scored Fryman and pinch runner Skeeter Barnes, with E.D. moving to third. Rookie Danny Bautista lofted a fly ball to right field, and Mark McLemore's throw home gunned down Davis for an inning-ending double play. Unfortunately the Orioles still lost, 9-4. Davis earned a partial game off in the nightcap, pinch hitting in the seventh and moving to center field in the next half-inning.

But Chris Hoiles knows who's boss.
Posted by Kevin at 10:26 PM