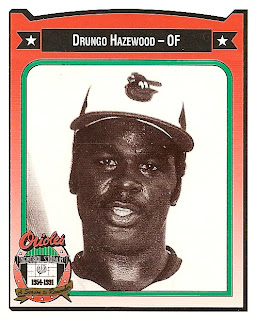 To a generation of Orioles fans, this is a lyrical name. Drungo LaRue Hazewood, of Mobile, AL. The 6'3" outfielder was Baltimore's first-round pick in 1977 out of Sacramento (CA) High School, and he flashed serious power and on-base ability in the minors. At age 19, he batted just .231 but posted a .378 on-base percentage at AA Charlotte in 1979. He tied for the team lead with 21 home runs, earning him a spring training invite the following year. Drungo was eventually sent back to the minor-league camp despite a .583 batting average in the Grapefruit League. Earl Weaver undoubtedly knew that the youngster was still too green, but he told reporters with tongue in cheek that he sent the outfielder out because he was making everyone else look bad. Hazewood repeated AA in 1980 and improved to .261 with 28 homers and even added 29 steals, but his OBP dropped to .355 and he struck out a staggering 177 times. It had become obvious that he had trouble with curveballs, and that proved to be a fatal flaw for his career. A September callup to the O's saw him go 0-for-5 with 4 strikeouts in what wound up being his only major league exposure. After three more seasons of diminishing results in the Baltimore farm system, Drungo Hazewood was an ex-baseball player.

Hazewood was one of the players profiled in Dan Barry's book Bottom of the 33rd, an excellent blow-by-blow account of the longest game in professional baseball history, which took place in 1981 between the Rochester Red Wings and the Pawtucket Red Sox. The outfielder explains the origins of his unusual name: he was the ninth of ten children born to Leonard and Catherine Hazewood. When Drungo was about to be born, his mother told his eight older siblings that whichever of them won a footrace to the hospital would name the new baby. Her son Aubrey was the victor, and named his new brother after the surname of a friend. Barry caught up with Hazewood and found out that he'd kept busy with a number of blue-collar jobs in the 30 intervening years, going from construction to a moving company to commercial trucking for Sara Lee.

What made me think of Drungo today? The Birds traded for a new backup catcher, acquiring Taylor Teagarden from the Rangers. While it's no Drungo LaRue Hazewood, Taylor Teagarden is still a pretty fantastic name.
Posted by Kevin at 9:35 PM