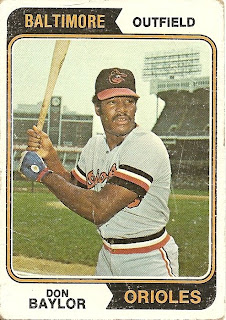 -Don Baylor's bright blue batting glove. Did he ever wear it in a game? Where did he even get it?

-The wear and tear on the card's surface. This card could tell some tales, but it has just enough scratches and creases to give it character. Any more damage and it would almost lose something.
-The real original Yankee Stadium in the background. Most old Topps photos taken in Yankee Stadium were shot either on the left field or right field side, and you could see that white gatework facade that remained after the mid-1970s renovation. But here you can see the big classic scoreboard looming in center field.

-The barely-visible metal snaps on the front of Don's waistband. The best thing to happen to baseball in the 1990s was the return of belted pants.

-This isn't really related to the card per se, but it's been reported that Don Baylor cried when he learned that the Orioles had traded him to Oakland in the Reggie Jackson deal. In a day and age when players are largely seen as mercenaries, it's heartening to remember someone who was so appreciative of his teammates, coaches, and fans in Baltimore that he wept upon learning that he'd a) been traded for one of the biggest stars in the game and b) was headed to a team that had just won 98 games.
Posted by Kevin at 11:48 PM